One of the essential items we never leave home without on cycle tours is Imodium! Oh my goodness was I unwell during the night….both ends … leaving me wondering how I would get through today. But Imodium saved the day rendering me capable of riding, although somewhat dehydrated.

I am blaming bugs on my drink bottle. When you ride in the wet, lots of ‘muck’ gets splashed up onto your bike from the road and other cars. It is not uncommon to have a gritty bottle and often I will squirt some fluid out before drinking. The lids will be soaking in Milton’s tonight!

Our Air BnB host had put on a delightful European style breakfast which I did enjoy as I tried to get some goodness back into my body.

Leaving Rotorua around 8.30 am it was a pleasant 14 degrees. We rode by some geysers heading out of town. You could clearly see the water bubbling and there was a strong smell of sulphur in the air. 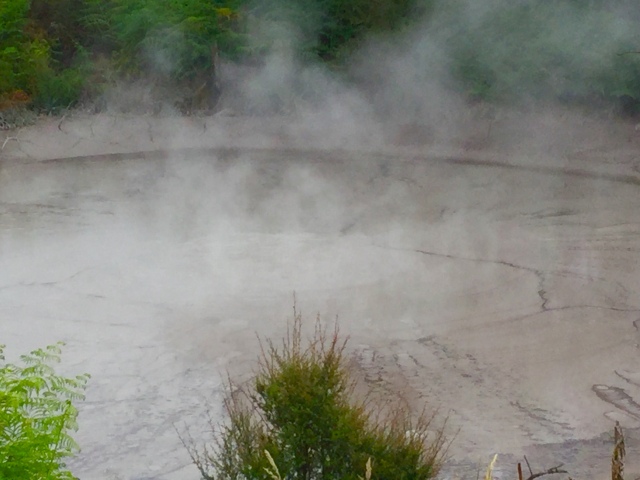 Then we needed to cross over onto the highway, and we did this via a nifty and safe under the road passage. In the centre of the road is a hub  with spoke like tunnels heading into various directions. It was impressive and a safe way for walkers and cyclists to cross the highway and other roads adjoining.

This was our final view looking back towards Rotorua as we headed out on the highway. You can just see the wisps of steam from another geyser.

Today was reasonably hilly, as can be seen from our elevation graph. The ride was 118 km today.

After leaving the highway (rarely are highways well regarded as enjoyable by cyclists), we were traversing great back roads like this. Green and lush farms with predominantly cattle grazing.

Navigationally, we pre plan our route on a website known as Ride with GPS. We can then upload the ride files digitally onto our Garmin’s which have satellite navigation facilities. In addition, we print out the route with the turn by turn instructions, as a backup to the Garmin files.

Ordinarily this works fine, but at times there are issues. Here I am looking somewhat puzzled/bemused with the route pointers! Note the tan line mark on my legs now….that is going to look so great when I get back to work wearing dresses in a few weeks..😂😂😂

More lush green countryside. So much of the land in this area looks like ready made links golf courses.

Navigationally there were a few issues today. Garmin mapping failed us in that the road we were riding on did not exist according to its maps.  The road had clearly been around for many years, as it had plentiful lichen growth. We decided to plod on and see where we ended up.

We stopped at the first road junction, which happened to be the SH1. Whilst we were still looking at our maps this big milk tanker pulled up, and the driver got out to say ‘hi’. He had seen us earlier ‘down the road’ and was curious as to our plans.

His name was Kevin, and he suggested we take another road via plantations, which we did. Great road!

This is a section of Kevin’s route.

There was a little issue by now. We had only ridden past one shop, and that was mid morning, where we did stop and grab food and drink. Since then, zip and I was thirsty as, and rationing my fluid, having nearly consumed my second bottle.

I was reluctant to tell Tony as I knew he would give me his bottle, but he too needed fluid. I guess I still needed extra fluid due to what I had lost overnight, plus it was now in the mid 20’s.

Eventually I said to Tony that we needed to stop at the first sign of anything that might be water, even a farm house. Tony saw a sign for water, but upon closer inspection this was not going to work, let alone the potassium cyanide sign next to it!

About 25 km later, I found a shop and bought lots of water, coconut water and an icy pole. Feeling heaps better my energy also picked up for the final section into Taupo. We went via a tourist route to check out the river. There was a jet boat in action that would have been up to the falls. Cruises also depart from here.

More green hills on the outskirts as we climbed up from the river.

Here is our route today. It was a great ride, highly enjoyable. 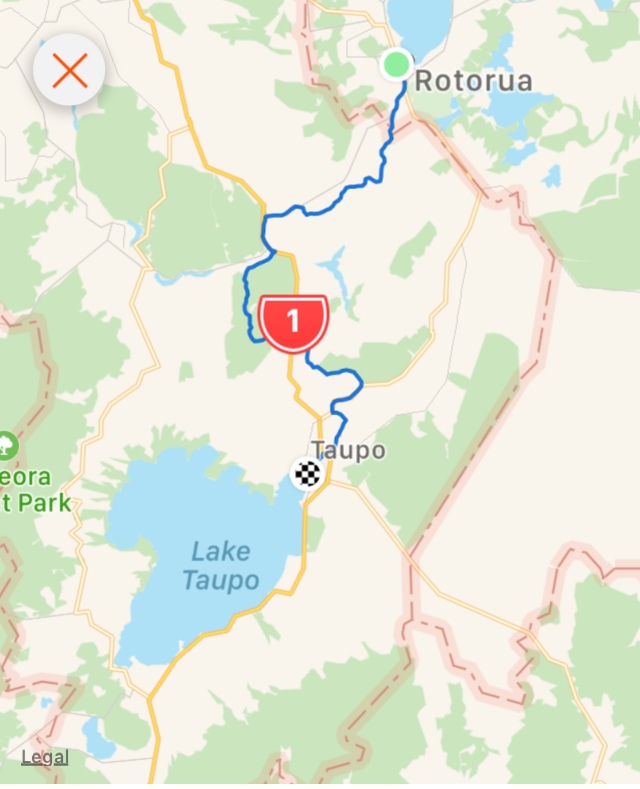 We are now in Taupo. The weather is nothing like Sue and I had in January. I will not be donning my bathers for a dip in the lake this time! It is quite cool this evening, with occasional rain and very strong winds.

Tomorrow we climb up to the village known as National Park, passing by the volcanic Mt  Ruapehu in the Tongariro NP. Rain is not forecast but 50 kmh westerly winds are! ( not the direction we want 😩). I am hoping the meteorologists have overstated the wind strength!

As I look out across Lake Taupo the mountain is under a shroud of heavy cloud. Let’s hope it lifts tomorrow for some great views.

8 thoughts on “Imodium saves the day!”