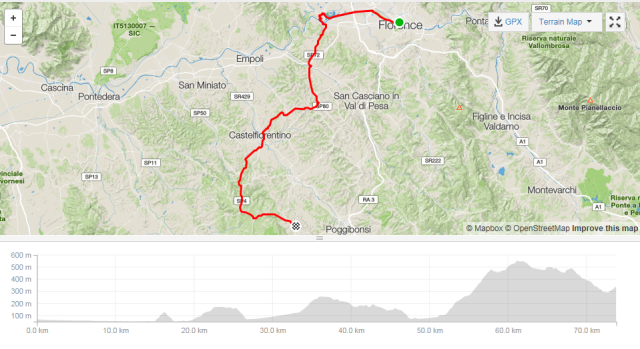 We have now ridden over 2000 km since leaving Australia and most people might think that is enough. Bike riding is such a great way to see a country. You get to see, smell and hear so much more than you possibly could in a car or bus. So after having two days off the bike and travelling from Venice to Florence by fast speed train ( up to 250 k /hr), we prepared for our final fling before heading home.

Arriving in Florence we were ‘greeted’ at our hotel by a female with an unfortunate disposition who proceeded to make life as difficult as possible there for a while but we were able to get through the situation although our bikes needed to be housed elsewhere in Florence and we needed to pay 16 euro for that. So we scootered our bikes around to the commercial garage and got a bit of a feel for Florence.

A pretty awesome city. This is the view from our bedroom window.

Inside the duomo it is massive. The dome is particularly beautiful.

This morning after breakfast we carried our bike gear around to the commercial garage to collect our bikes. We need to cart all our clothes, toiletries etc for 3 days on our bike. The bike will be significantly heavier, altering the balance and making hills slower and harder.

We headed down to Ponte Veccio which is where our route started. We had walked along the bridge last night amazed by how many jewellery shops lined both sides of the bridge.

It was a very slow few kilometres getting out of Florence in the early morning crazy Italian traffic but we eventually hit quieter roads where we could relax more.

The morning was quite cool and overcast but the forecast did not mention rain. By the 30 km mark it was spitting and we stopped for a coffee to see if it would blow over but it looked like it was going to hang around so we pootled on.

The hills were certainly more difficult with the extra weight on the bike so we just chugged up. Some photos from the ride:

We were so pleased to arrive in San Gimignano as it was only 7 degrees Celsius and we were a bit damp and certainly cold! We were met by the nicest lady. Total opposite of last night. The hotel building was constructed in the 1500’s and has an awesome cellar area that has been excavated.

San Gimignano is apparently one of Italy’s best preserved medieval towns, standing on a hill overlooking the Val d’Elsa. The town has ancient Etruscan origins fro  3BC and is named after the Bishop of Modena who saved it from barbarian hordes in 370 AD. After becoming a free commune in 1000 the village flourished. Within its newly built city walls noble families vied with each other in the construction of magnificent towers as residences. By the end of the 13th century there were 72 towers. 13 remain.

We also met friends for each in this most unlikely of locations for a catch up. We met James and Kirsten on Qamea Island, Fiji over Christmas-New Year. They live in Sydney and have been travelling predominantly so James can play photographer having just completed a photographic tour including Dubrovnik, Slovakia etc. Just wondering where our next exotic location catch up should be??