We were so pleased to be back on our bikes as we felt sluggish from not riding the previous two days.

It was a respectable 13 degrees Celsius when we packed our bikes up outside the hotel. These two photos are from the hotel whilst clipping our gear on.

We rode about 10 km of what I now call footpath scootering, hopping off and on the bikes, pushing, criss crossing roads whilst we competed with peak hour Bologna traffic. A few more shots on the way out. 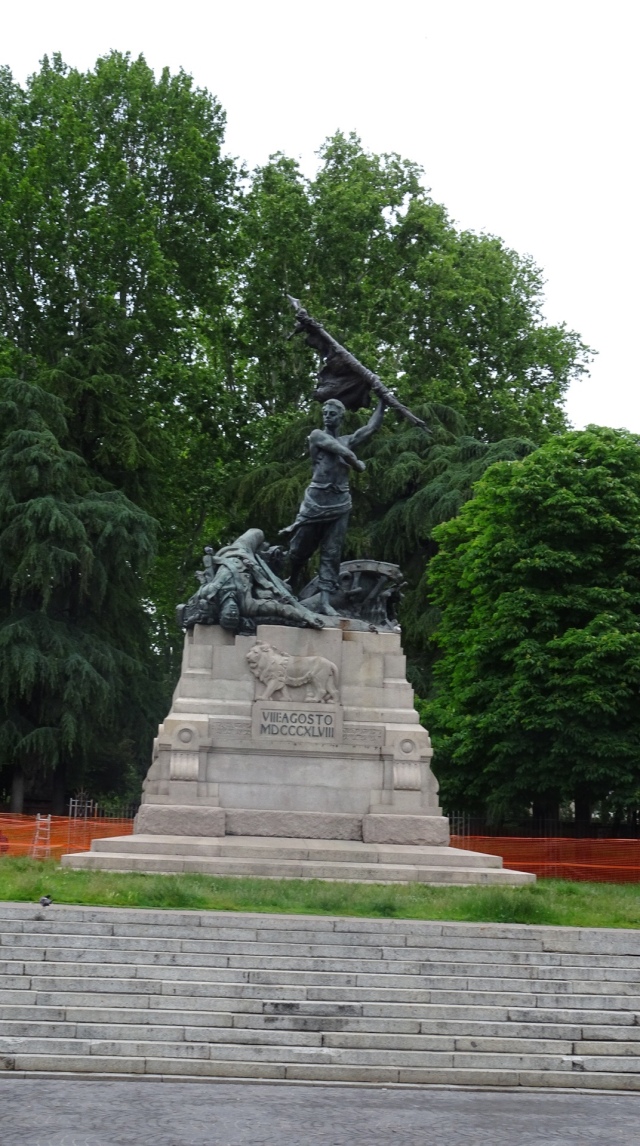 Finally we hit the agricultural flat Venetian Plains. Not my favourite riding as I recalled from our 2016 London to Venice bike ride. You can see some of the crop damage caused by the heavy rains in the top photo. The busy road to the left is the European truck route, and it is packed.

We saw many fields like this with indiscriminate flat spots.

There were also many stone fruits, spinach and potato crops in other paddocks. 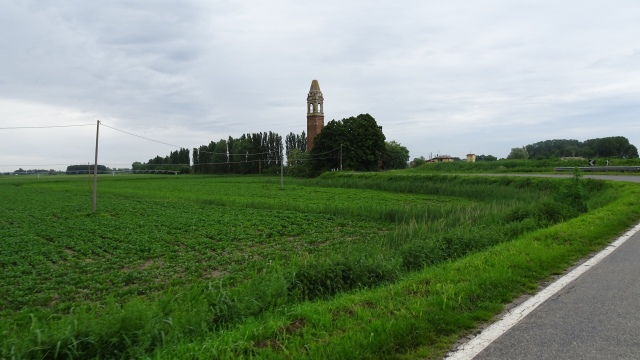 The rivers we crossed were flooded, muddy waters with floating debris. 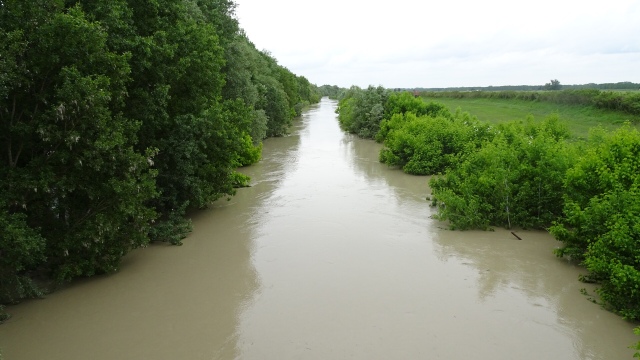 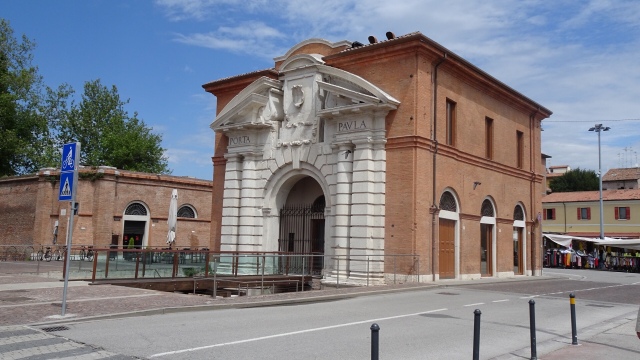 Here I am riding slowly down one of the many narrow roads. 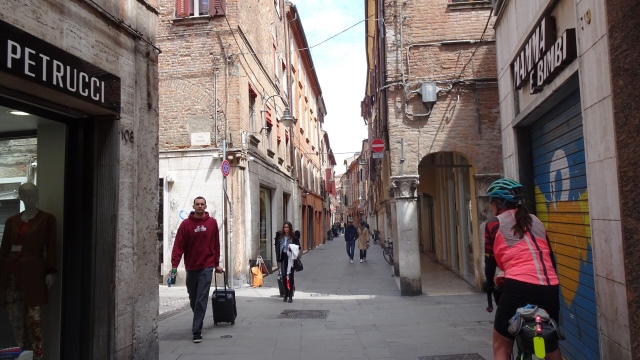 We turned the corner and found more history. 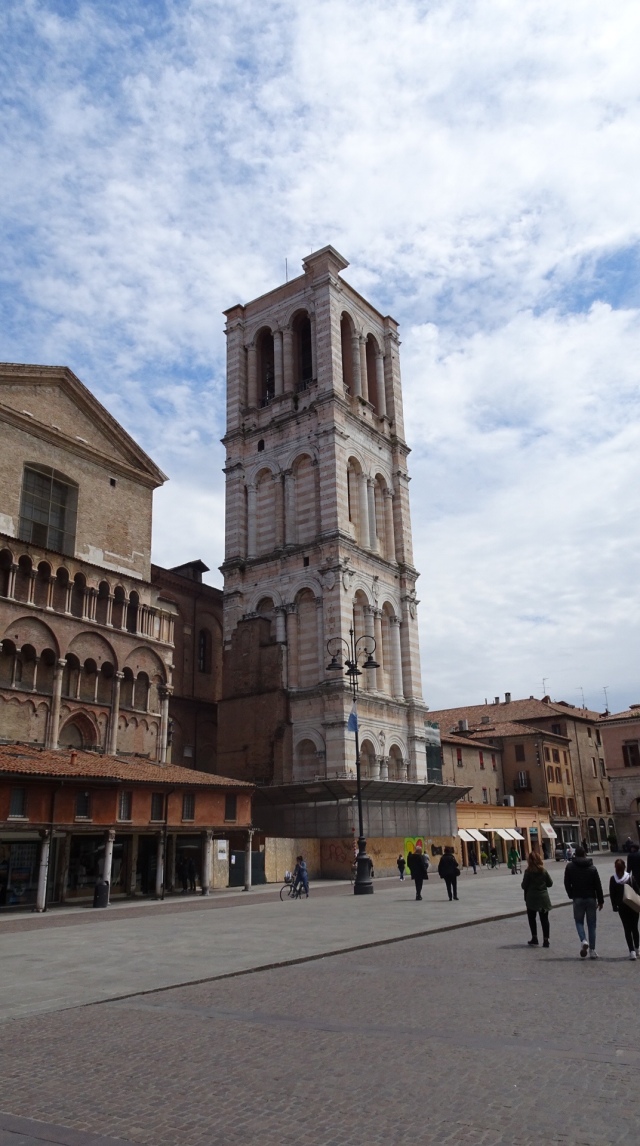 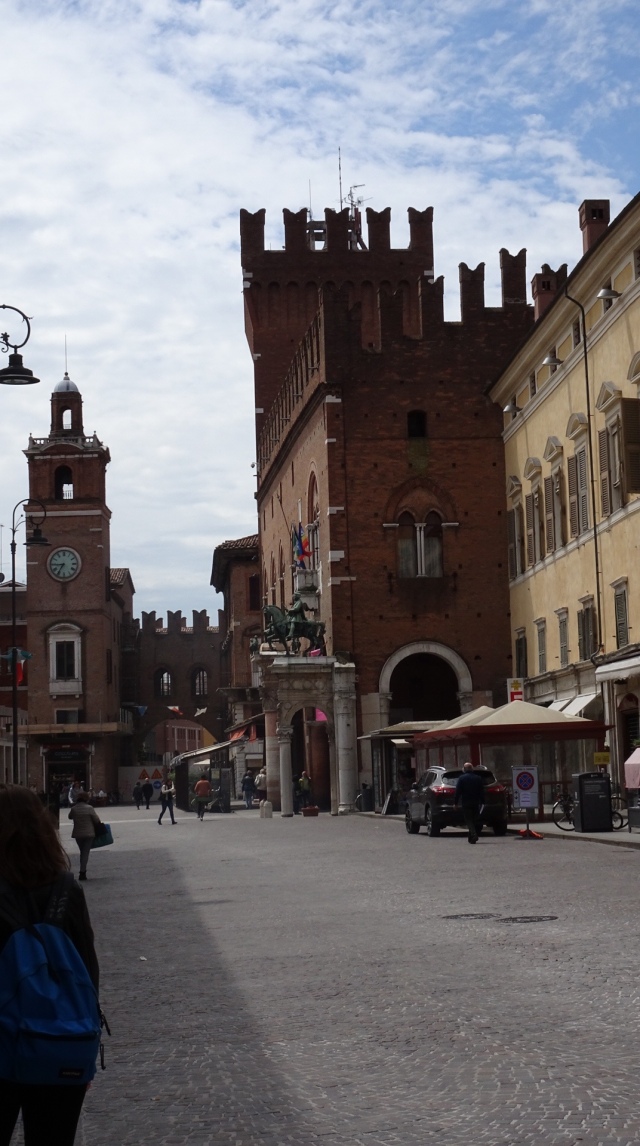 We settled on lunch at a cafe adjacent to Este Castle “Castello Estense” dating back to 1385. Surrounded by a moat, it has three entrances with with drawbridges. 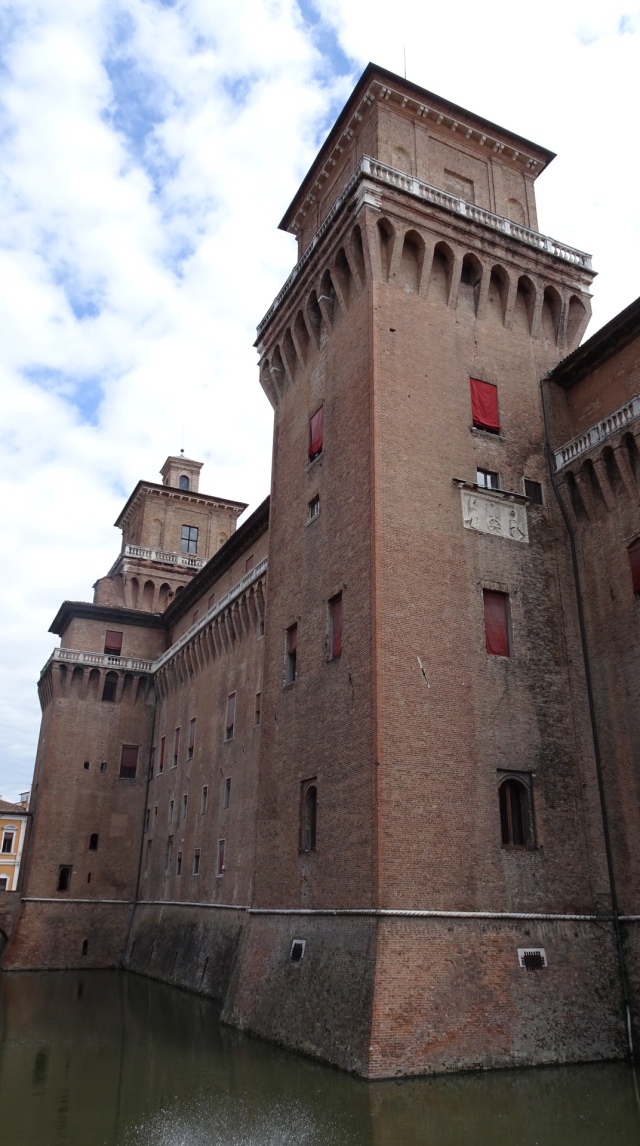 Walking through the centre there were plenty of old canon balls and wells. No that is not me pushing my bike. 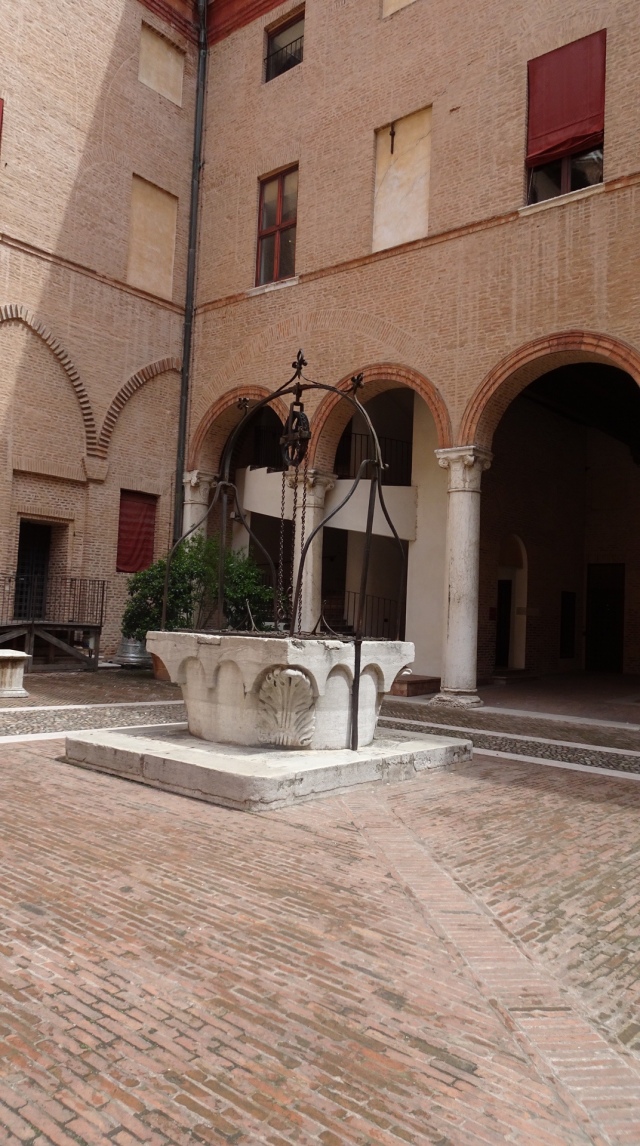 You just cannot eat your lunch in peace in some countries, including Italy. Hawkers hassle you. We were approached by four different guys selling ‘genuine’ articles! This certainly did not happen in any of the Eastern European countries we were in.

The guy below was selling necklaces and beads. He gave this particular couple a really hard go. He did not get far with us….Tony moved him on in ultra quick time!

It was nice to see the sun! That had not been forecast, but totally welcome!

Leaving the delightful city of Ferrara, we headed across the Po River, a 652 km long river that flows into the Adriatic near Venice. It is Italy’s longest river. It flows through a series of channels that Leonardo da Vinci helped to design.

Here it is in flood from the last few days heavy rains. 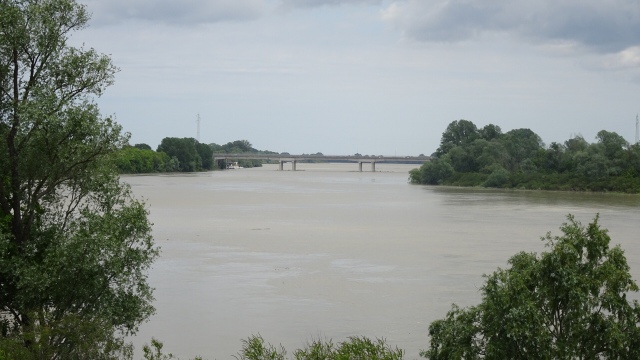 For about 15 km we followed the river riding on a cycle path on the flood levee. We turned off the levee to head through this village.

After 96 km we arrived in Rovigo. At first glance, less culturally preserved and interesting that Ferrara. Something is seemingly not square here. The house is on an angle. Riding under that arch we were in the central area of the town.

After showering we headed back into the central area to check it out. Somewhat disjointed, there are a number of surprisingly interesting buildings.

The first one we came across you could not miss given its height. It was adjacent to a roundish building named La Rotunda. 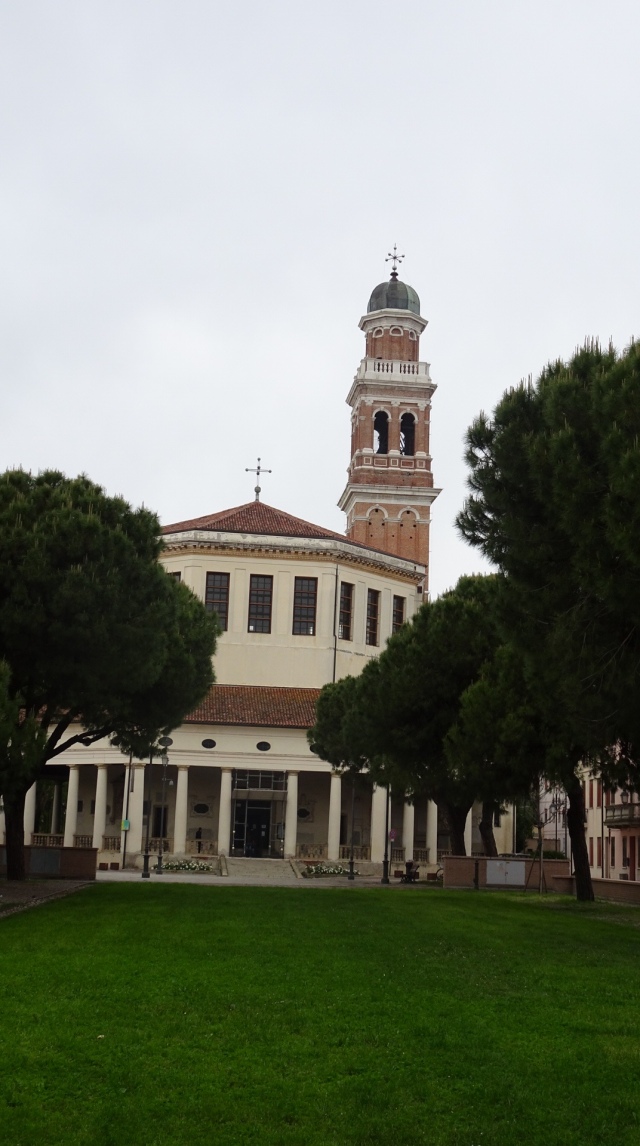 La Rotunda was being renovated and we were surprised to find a door open, so we wandered in. Our expectations were blown away and we were amazed with what we saw. 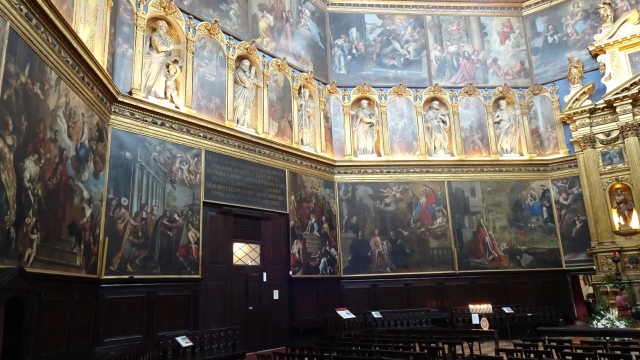 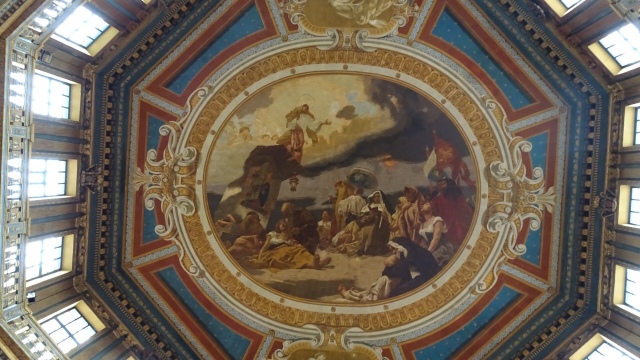 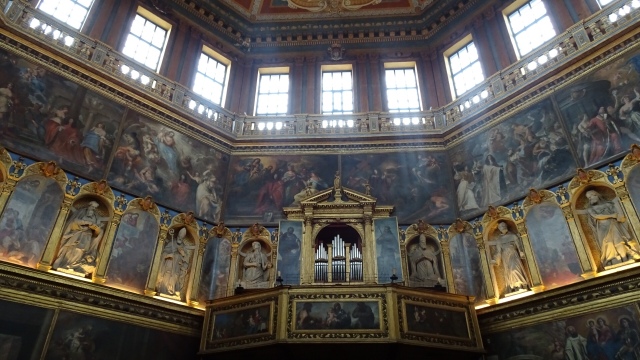 The place was one gigantic artwork.

Some other curios included the local duomo….no doors opened for us!

A few other local photos before we retired for the night. 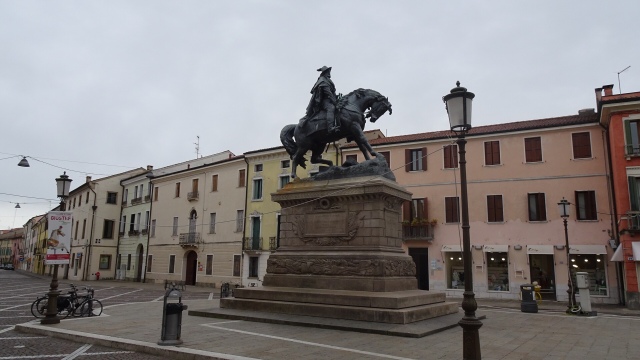 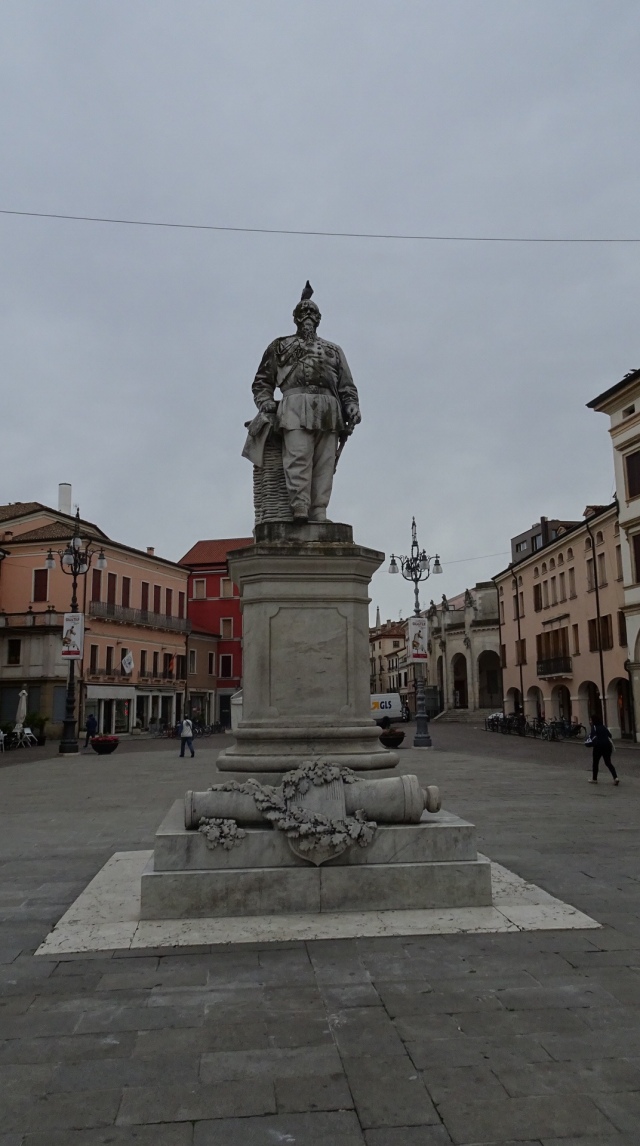 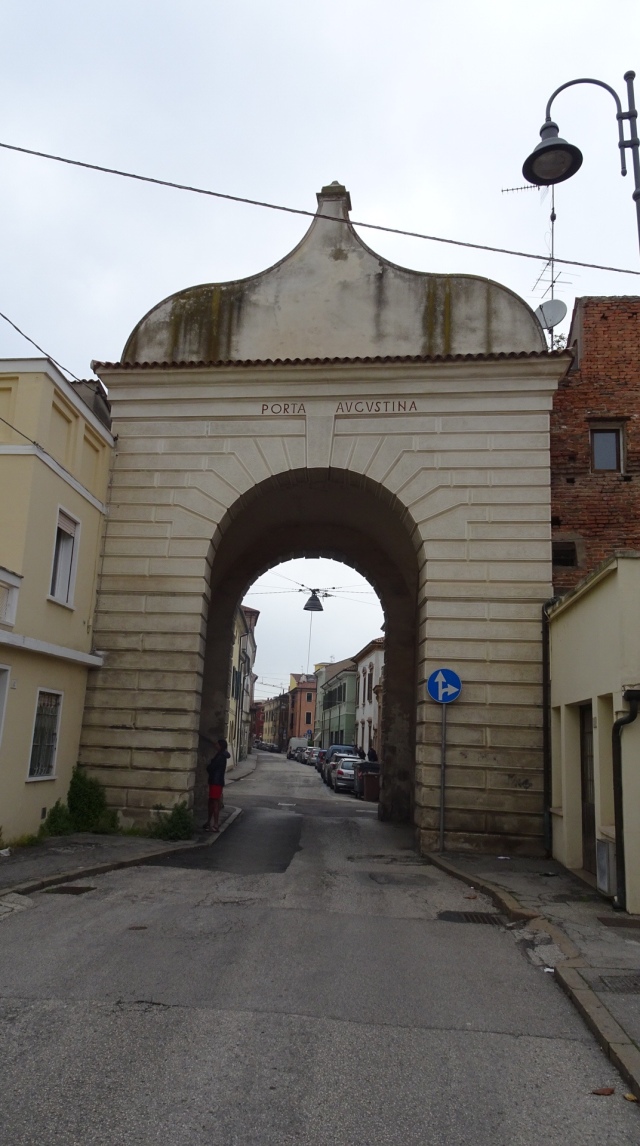 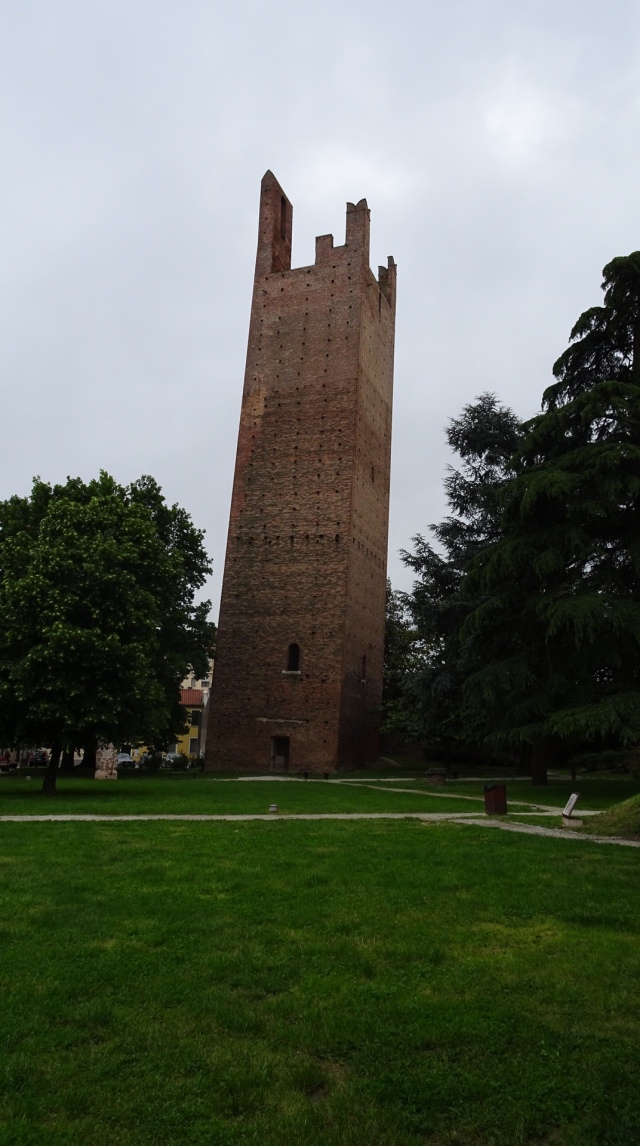 Tomorrow we head to Belluno, regarded as the ‘front door’ to the Dolomites. A longer day of 150-160 km, depending upon which route we take. We are hoping the rain and winds are kind.

The last photo is from Ferrara. I was intrigued as you could tell this tunnel went under the Castle much further. Secret passages for me are like locked door on towers…mystery and intrigue!