Today is our seventh day of this cycle tour. Starting in the Czech Republic we headed to Austria, Slovakia and today Hungary. Incredible that we have been on the road for a week already.

A longer ride of 150 km was scheduled, so we headed down to breakfast first thing to fill up. 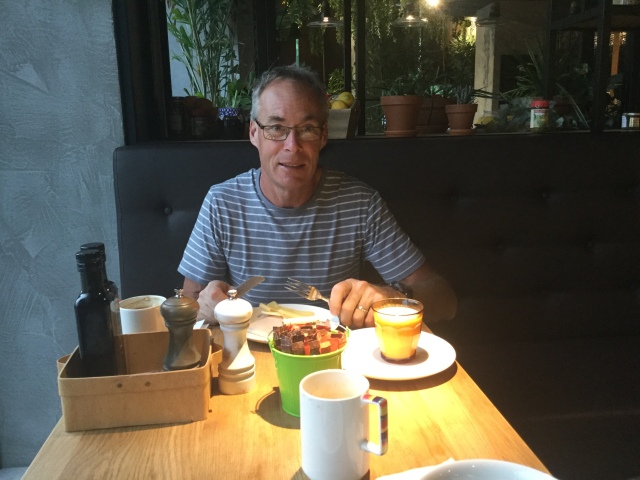 Looking out the window from breakfast it looked pretty bleak.  The forecast was a maximum of 11 degrees and some rain. Crazy spring weather after 28 degrees 2 days earlier. One bonus was that the winds were minimal.

We headed off in light drizzle. It was a very cool and crisp 8 degrees.

The first 10 km out of Bratislava in peak hour ensured we got dirty pretty quickly with road grime flicking up. The roads quitened down nicely as the majority of traffic was heading into the capital.

The drizzle eased up after about 20 km and for most of the day we were on a mix of road and bike trails (sealed and unsealed).

The country roads with the ubiquitous canola! 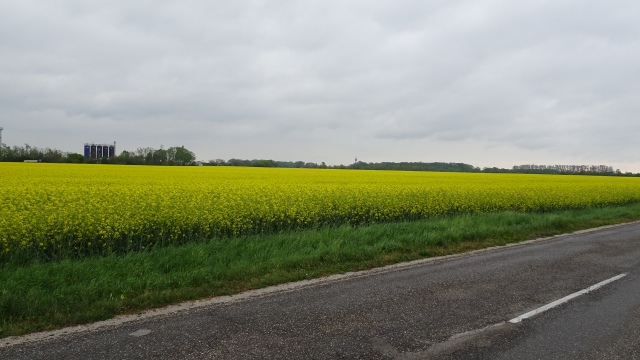 Further on we had a fairly long stint on a gravel/dirt/pot holed track. As we approached a farm house on our left, a dog shot out angry that we had invaded his territory. We both started upping the power ready to try and escape, when the dog, running at an adrenaline  charged full pace abruptly came to a painful, screaming halt.  He was on a chain and we were thankful. I am sure he has a very sore neck!

This town had a few curiosities including this wonderful storks nest, sitting perched on a light post adjacent to the local  church. We saw another one shortly after. 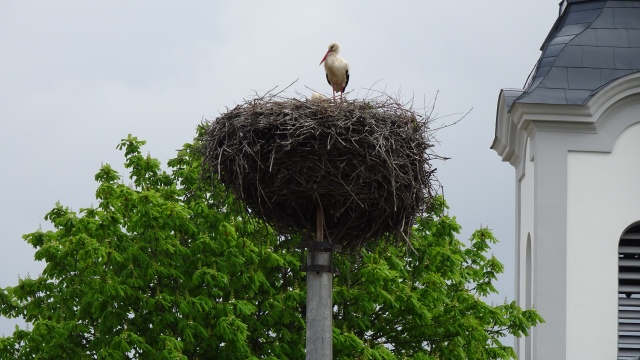 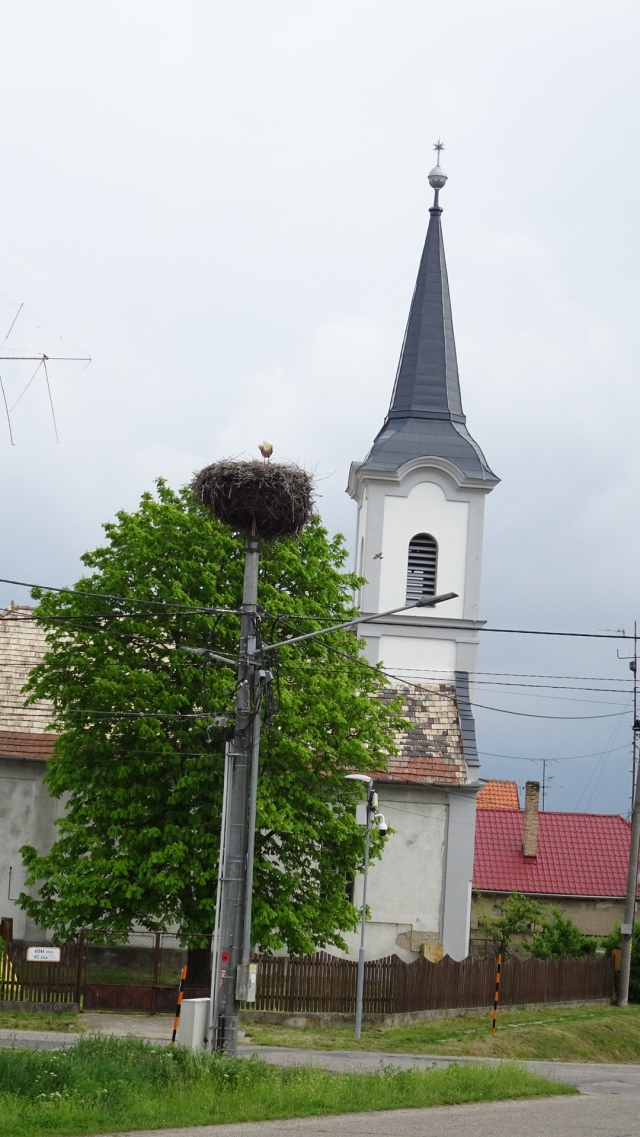 Then at the other end of town was this junk shop where you can buy your own stork or other ‘ornaments’ for your garden. Do they leave this crap, oops….I mean do they leave this ‘stock’ out overnight? I guess they do, seriously, who would steal it?

I did not drink much water today but proof that I did drink some! The maximum temperature was 12.4 degrees. Underneath my rain jacket I have a wind proof gilet, a merino jersey and merino arm warmers. 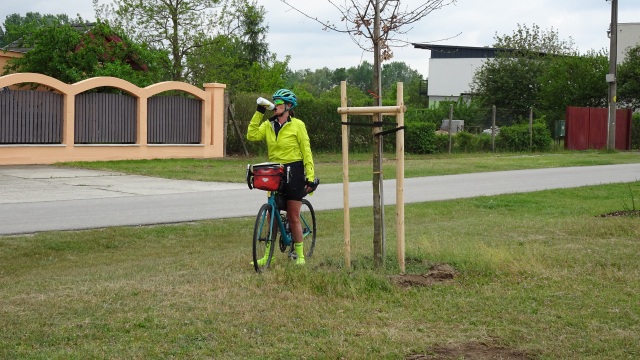 Finally we reconnected with the Danube river. Here is one of a series of war memorials along this particular stretch.

The border between Slovakia and Hungary is in the middle of the river, so the other side is Hungary. We were back onto the bike path when it started to rain again! We had cleaned our bikes some 50 km earlier when we stopped at a service station. However, this rain provided a further clean. We deliberately rode through larger clean puddles for a ‘rinse’.

Bang the bike path just fizzled out! We had to push our bikes over to the nearest road. 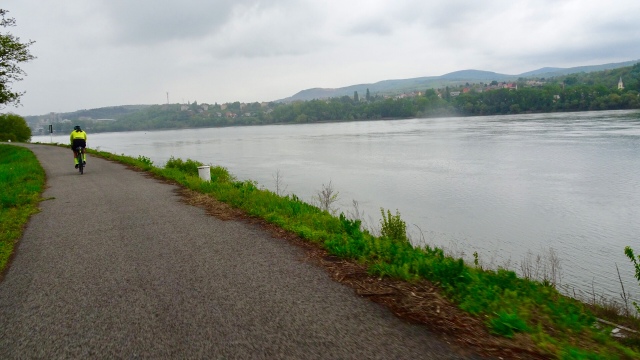 Finally we got to cross the Danube and take some photos.  We had been able to see the Basilica for some time in the hazy distance. We were pretty impressed standing on the border of two countries and gazing in wonderment.

Our accomodation is only  few hundred metres from the Basilica. Our bikes are stored in the courtyard downstairs somewhat dirty but heaps better than earlier in the day.

Tony needs to replace the front disc pads on his bike as they were making some noise today but we will wait until Budapest to replace.

After showering and doing our laundry we started walking. 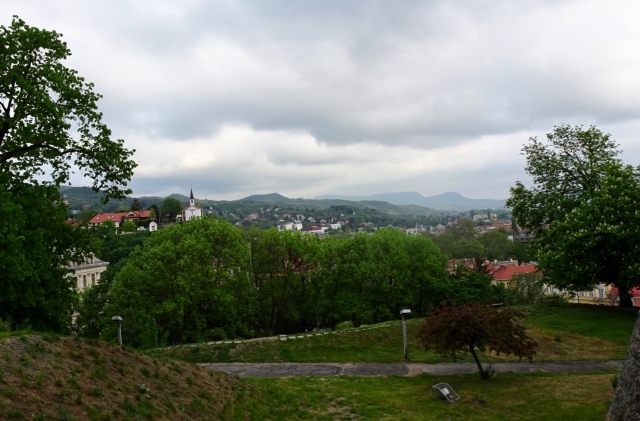 The old castle was closed, and is located adjacent to the Basilica. This photo was taken looking in from one of the gates.

A pretty impressive entrance gate to the basilica, although I note from the Roman numerals, it is not ‘that’ old, with the 1874 date. 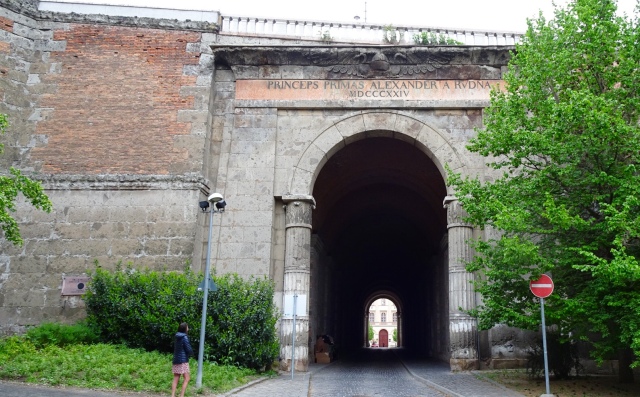 Through the arch is this building.

Then up to the very top of the hill is the Esztergom Basilica, otherwise known as the Cathedral of Our Lady Assumption and Saint Adalbert.

The historical heritage of the cathedral built on the Castle Hill of Esztergom dates back over a thousand years.

Following the conquest and the settlement of the Hungarians, Prince Géza ordered a Church to be built on this site next to his palace.

The young king, the founder of the state, was crowned here at Christmas 1000 with the crown sent by Pope Sylvester II.

It was King Stephen who set up the organisation of the Hungarian Church. Accordingly, in line with his intention, the construction of a cathedral began, with the purpose of making it head church of the country. 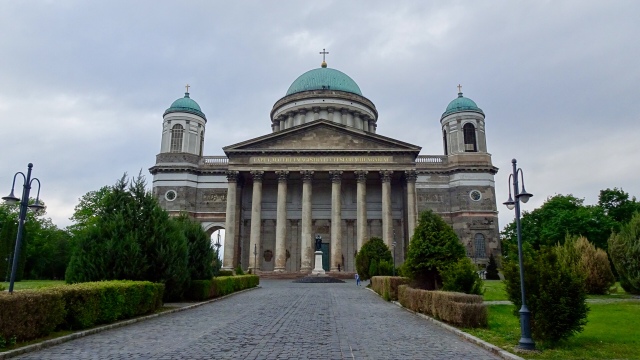 The photo below shows the (netted) dome, the Sanctuary and High Alterpiece. The High Alterpiece is the largest in the world painted on a single piece of canvas (13.5 x 6.6 metres). The work is of Michelangelo Grigoletti, based on Titian’s well known work, The Assumption, which can be seen in Venice.

The organ was first played here in 1856 in the presence of the famous Hungarian composer Ferenc Liszt. Renovation works commenced in the 1970s and are continuing.

It always amazes me.  Catholic Churches are lavish, but their seating is barbaric!

Walking back down the hill is this statue near the castle. 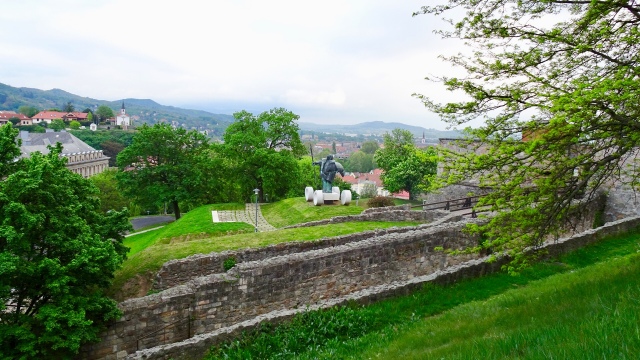 In town looking for a bank to grab some local currency.

No bank yet but what a classic bike.  Totally rusty yet it’s owner has it chained so it cannot be stolen. I have never seen such a rusty bike. 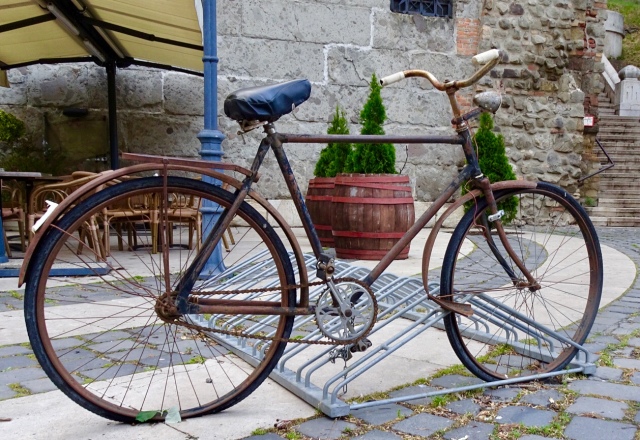 We found a bank and feeling rich with 50,000 florin to our name! Walking back we noted a cappuccino costs 550!

We saw St Stephens perched high on another hill.

Then this old Roman milestone plinth.

We had been recommended to eat dinner next door at the restaurant. It offered a range of Hungarian cuisine including a large range of catfish, knuckle and frog dishes.  There was a rooster manhood soup (🤷‍♀️🤔).

We ummed and aahed and I realised that it seemed somewhat incongruous that Olivia Newton John and John Travolta were belting out their well known Grease hit!

We both settled on a venison stew with ‘potato dumplings’.  I thought they might be like the Czech dumplings but no, they were potato croquettes! The dish was tasty though with a bit of a kick.

That’s it for today folks. Tomorrow we ride further down the river trails to Budapest. An easy day of around 80 km.

Thanks for reading and hug your loved ones! Today I learned that one of my Zwift friends lost his 13 year old son. Very sad and my thoughts are with him and his family.