Leaving lovely Tapeka meant getting up the big hill. The lady who owns the B and B assured me it was not as steep heading back into Russell. Yes, she was right… it was only 15 percent! ( recalling it was 19 percent heading the other way)… easy as! NOT!

Onto the ferry for the crossing…a larger stretch of water than I had envisaged. I had forgotten to turn my Garmin off, and half way over I suddenly remembered…poop, the boat was only doing 14.5 kmh…should have taken the fast ferry!! That was going to make my average even slower for the day, ha ha.

A large cruise boat was anchored, looking quite out of place.

Paihia was busier than I thought, with lots of activity. The giant marlin was one of my first sights.

I rode straight out of town ( once I got my bearings, using my phone to double check I was heading in the right direction). I followed the road along the waters edge, across a bridge and I took this photo.

Arriving at the Waitangi Centre, I decided not to enter as it would mean leaving my bike unattended with all my worlds possessions.  To the non Kiwi readers, this is regarded as the birthplace of the country of New Zealand, when the Crown (the British) got all the Maori chiefs to sign a document (that they could not read).

The land is very picturesque in this area. The adjacent golf course has magnificent views. 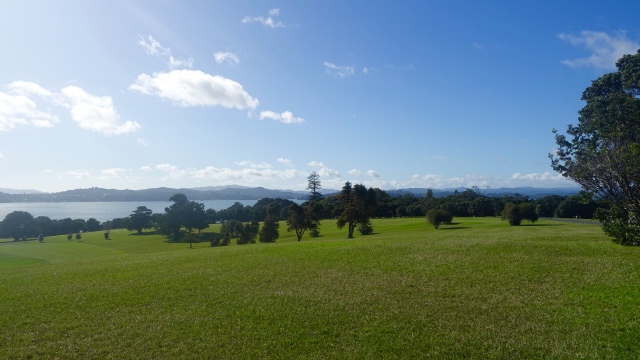 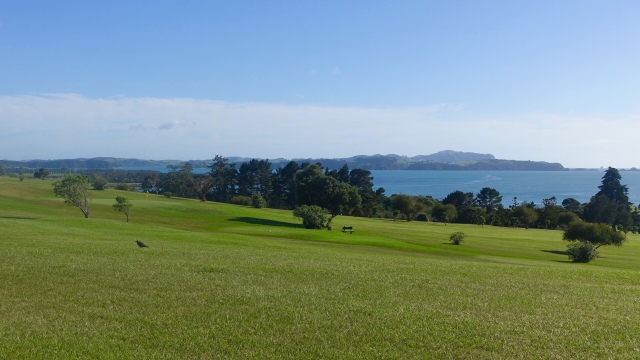 Unfortunately the Bledisloe’s nor the NZ government/regional council have sealed the loop road through here and I climbed up a gravel hill and descended very very carefully (most of my scars on my legs are from falls and faceplants on gravel, and I only have one spare derailleur hanger with me).

I saw the signs for the Haruru falls and as I crossed the bridge saw the wrong end.

So I peeled off the road, across the grass, down the track to have a better gander.

Looking downstream to a lovely vista. 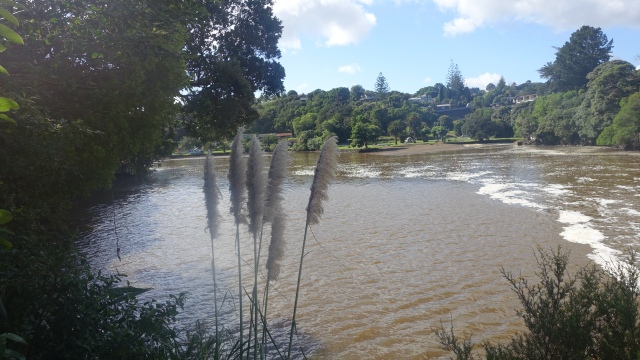 I turned left off the highway into Kerikeri at about 33 km, stopping at the first bakery on the left, succumbing to an early lunch as their food was good!

The other end of town has a lovely park where there used to be a British settlement.

This stonehouse is the oldest in New Zealand and operates as a shop. Some nice stuff, but when I have to carry whatever goods are purchased, one is quite judicious in spending money!

The view from the front of the Stonehouse across the river.

Crossing the river on a walkway bridge is a layout representation of the former settlement. 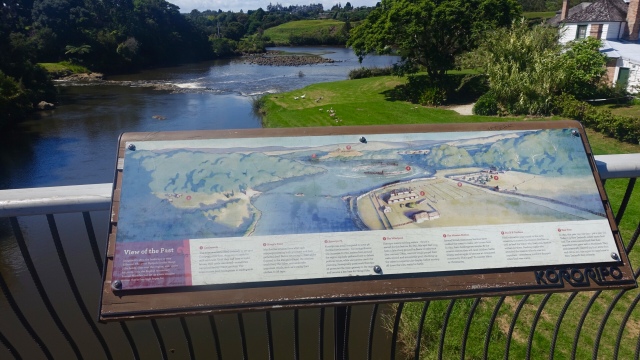 Then looking back from the other side.

Back onto the highway I had a 20km climb. It was a steady but reasonable climb, but I was glad when it was done! I was pretty thirsty and getting low on fluids so stopped at Kaeo.

The farmland is incredibly green.

I started counting down the km until Monganui as I was starting to feel a bit tired. I stopped when I could to stretch my back….and take a photo. 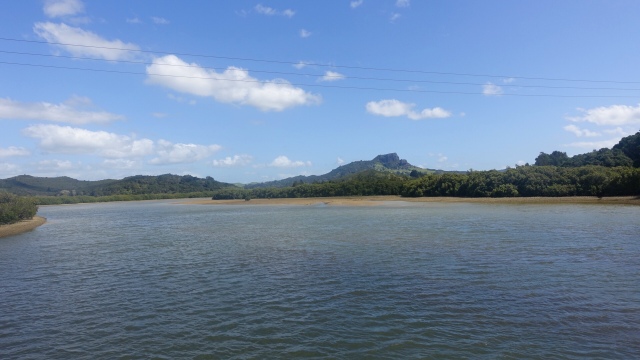 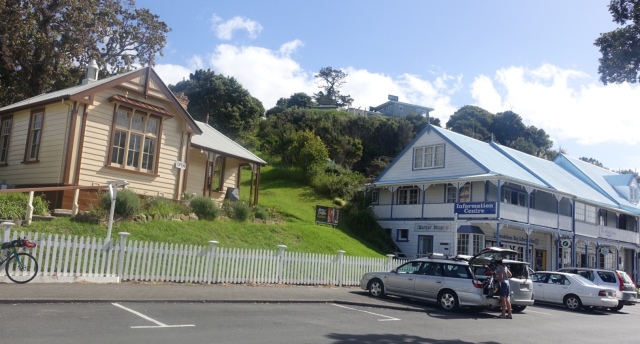 But, I was not staying in Momganui…and I had one final climb to undertake before arriving at Cooper’s Beach. Wonderful accomodation…I have  large wing of the house to myself, and my washing has been done, hung on the line, later found folded on my bed!! 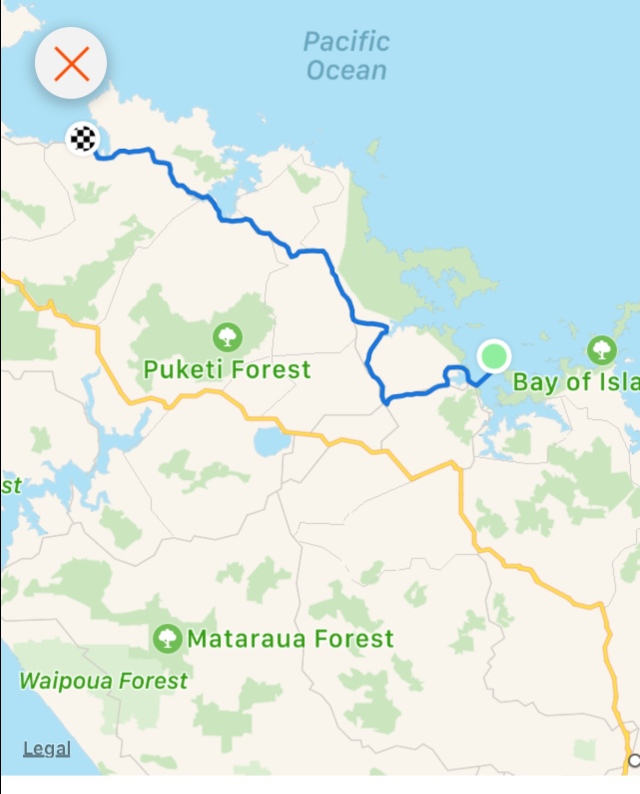 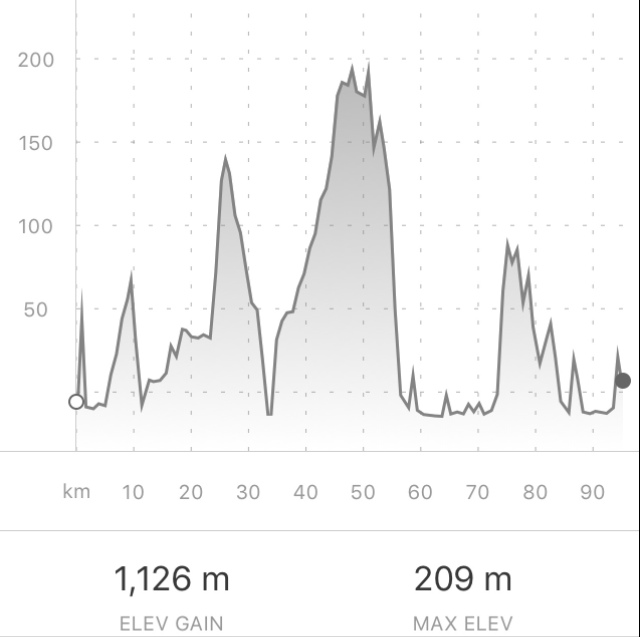 So for dinner tonight I walked to Mangonui..another steep walk. I went straight to the famous fish and chip shop overlooking the water. Seafood chowder, coleslaw and one apple cider, and i walked out the door with an icecream in my hand.

I am tired tonight.

Tomorrow is an easy day. Easiest of the trip and I am looking forward to it. Only 50 km or so, with a lot less climbing. The weather forecast is good, and I hope to sit on a beach and maybe have a swim.

The last photo is the view from where I sat at dinner. Magnificent.