Elvis Costello had the hit song, Pump It Up… some lyrics that I probably should not put in full in my blog, but great song with funky beat that will always make me move!  I thought of this song a few times today whilst riding – the chorus:

Pump it up until you can feel it

Pump it up when you don’t really need it

I awoke this morning to magnificent views. I just lay back and  soaked it in. 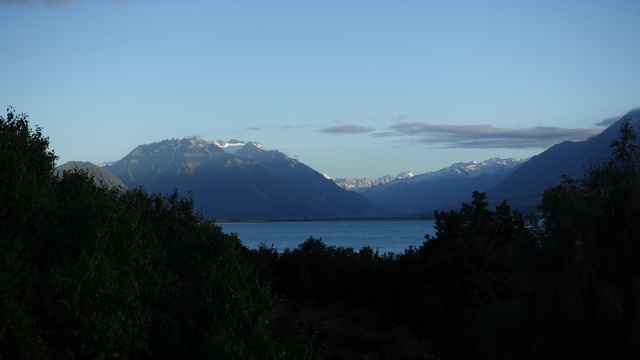 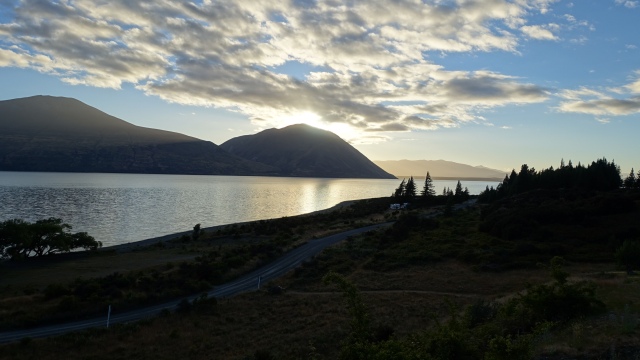 Communal breakfast was scheduled to commence st 8 am. Drag myself away from the view! As is common with bike tours, we were the very first there!

One view was replaced with another! How awesome is this? It was going to be hard to leave such natural beauty, but leave we must.

Starting from the Lake Ohau Lodge driveway, the trail traverses the lower slopes of the Ruataniwha Conservation Park, offering stunning views back across the basin to the Ben Ohau Range. 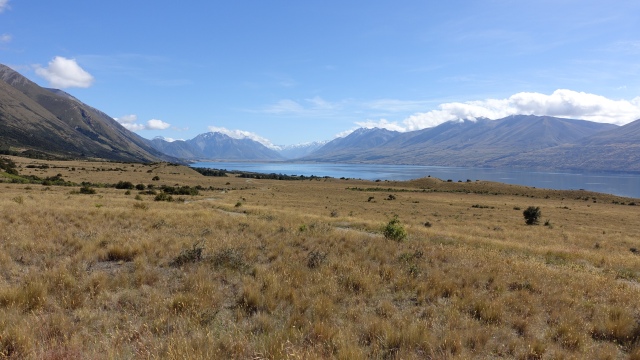 We crossed numerous creeks including Freehold Creek at 600 metres above sea level. 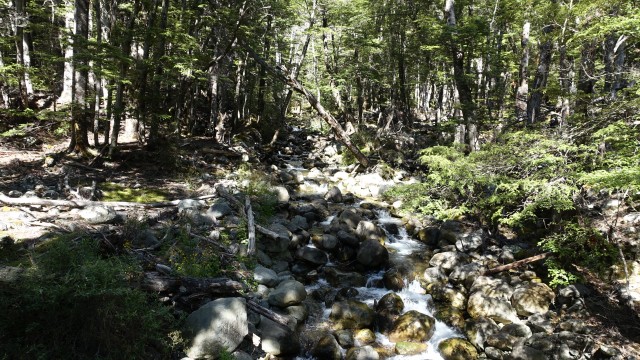 From here the track narrowed and became quite loose, slippery with numerous patches of larger rocks to navigate. Legs were pumping hard!

Pump it up Sharron!

I found I had to really concentrate too and could not turn my head left to look at the view as invariably I became unsteady on the bike. So eyes straight ahead looking to where I needed to ride, rather than what I wanted to avoid!

There are several false summits where the trail appeared to have reached the high point but instead kept winding upwards. 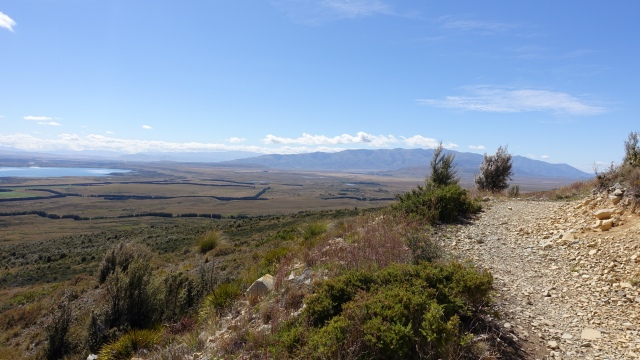 We then descended…what goes up must go down. 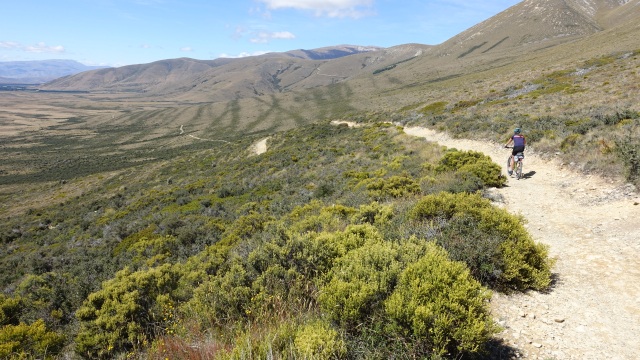 Tony heard an ominous bang in his back tyre and had a puncture. The tube had already been patched so we used the one spare tube the hire bike company gave us for the two bikes.

Pump it up Tony!

There were numerous small streams to cross.

We stopped off at the historic woodshed at the top of Quailburn Road.

From the signage I gathered that the woolshed was part of the Benmore Station.

The story goes something like this. 2 Scotsmen set off in search of new country to settle. Having come through Mackenzie Pass they crossed Tekapo, Pukaki and Ohau rivers. They climbed to the top of the last terrace and saw straight ahead of them north facing tussock covered ridges sloping gently to rich grassy plains.

“I’ll take this country” said MacMurdo pointing to the range.

They debated for some time, neither giving way. They decided to race to Christchurch to register their claim but that was over 200 miles away over rough country.

MacMurdo won the race and named the land Benmore after his birthplace in Scotland. The year was 1857.

There were toilets at the woolshed, very welcomed by this female cyclist. I was taken with this message on the loo wall from 2 French cyclists earlier this year.

The terrain had flattened considerably and we were riding around farmland. 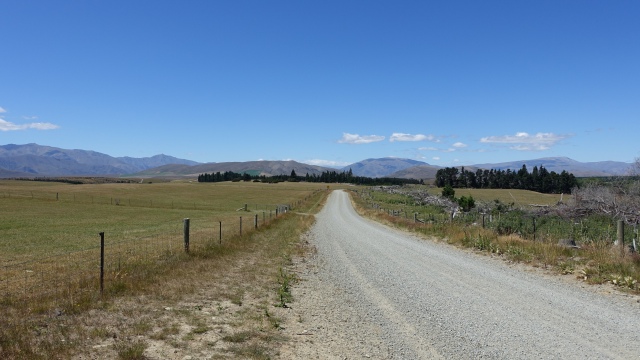 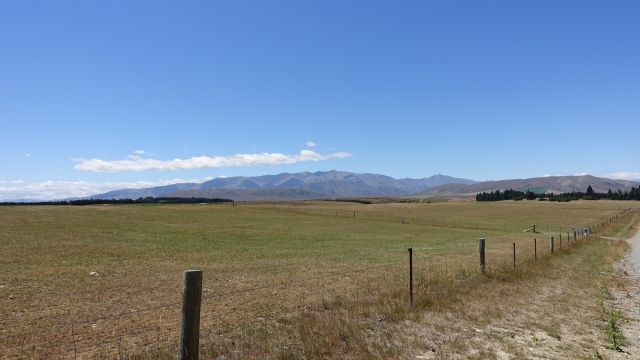 With plenty of time left in the day we decided to take a return detour of 14 km along a gravel road to visit the acclaimed Clay Cliffs.

The Cliffs are on private property and the last 4 km in was heavily corrugated and not a lot of fun. We saw the most cars on this section as well with dust dust and dust.

I was not sure what to expect but once in sight it was “wow”. I also had my second spill of the trip climbing the last few metres spilling on loose gravel.

Descending from the cliffs we stopped to climb through the farmers fence at the Ahuriri River to top up our bidons.

Returning to Quailburn Road we took the off road trail adjacent to the highway, passing through Ahuriri Camp Ground where there were many tents erected and much activity on the river banks.

Exiting the camp ground we crossed the river and arrived in Omarama via an off road trail.

Great accomodation here in a well appointed unit. Cycling clothes all washed but not being dried in accordance with our normal conventions ( bra, knicks etc hanging out windows). This place has a clothes line and it is windy as! Bonus!!

So a solid day in the saddle. Arms and shoulders can feel it from the constant hump and bump. Tomorrow we head to Kurnow with lakes, rivers and dams.

Here is a map of today plus the ascent/descent info. 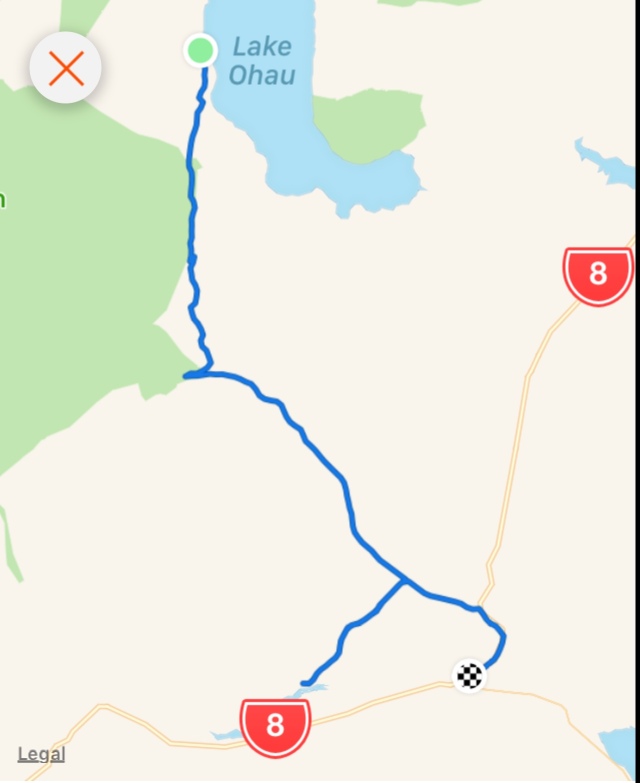 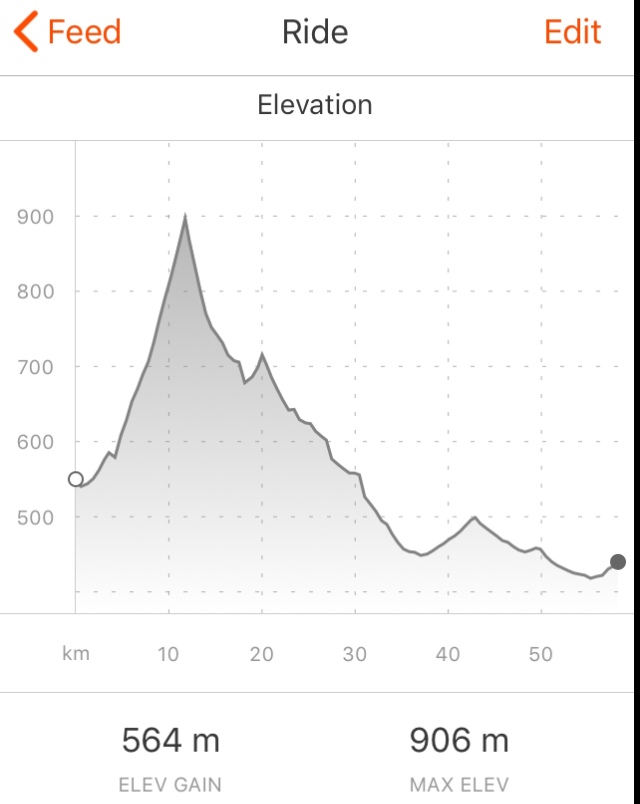