I slept fitfully courtesy of two reasons …firstly I had noisy neighbours in the hotel…4 me  in one room drinking and yahooing. Secondly, my rib really ached.

I was up early for breakfast joining my noisy neighbours who were pretty quiet and  looked seedy.  I needed to be at the hospital by 9am,  and yes got there with ten minutes to spare.

Totally impressed, all 3 of my teeth were restored, so they look ‘normal’ again! My credit card is not so intact paying out lots of Swiss francs.

I caught the train to Solothurn, renowned as Switzerland’s most beautiful baroque city.  The city was founded by the Celts.  Many of the buildings were constructed from 1530 to 1792.

The town is truly beautiful, perched on the banks of the Aare River.

The first building I stumbled on was St Utsen Kathredale, and found the door to the bell tower open, with a sign stating 3 Swiss francs, but no one to collect. Up I went, all 200 plus steps.

This was one of the bells I passed on my way up.

Wacked my head again on the narrow climb…like I needed another wack!

I got to the top and there he was! Yes, the man waiting for my 3 francs!

The view was outstanding though, as you can see below.

Heading down from the church I found this gate promoting a bike day. They were setting up in an adjacent park and it opens tomorrow.

I love the Swiss water fountains. The water is clean and drinkable. 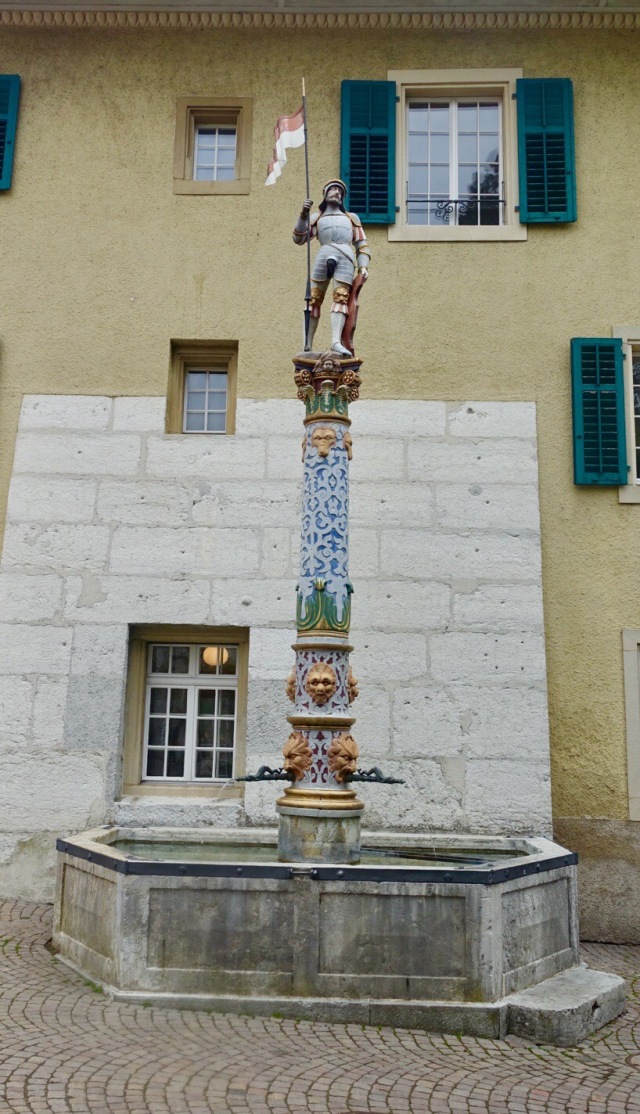 As I walked through town I came across numerous old buildings. 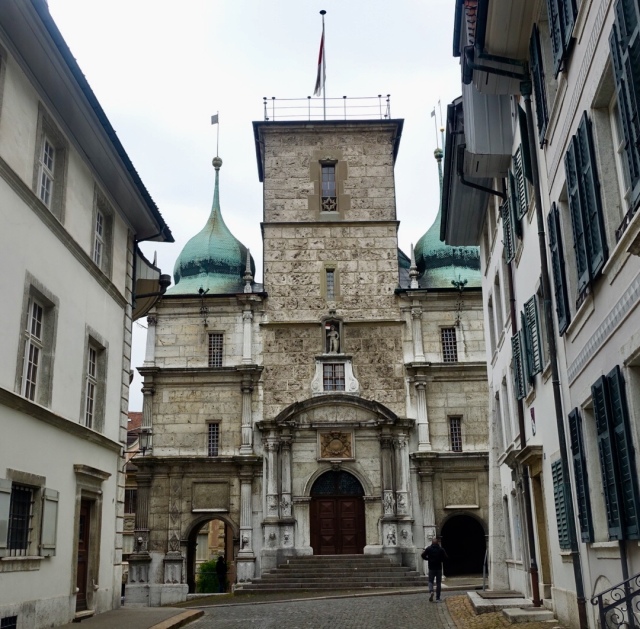 Then the zytglogge, a clock…the lower part dates from the 12th century, and the upper from the 15th century. The astronomical clock was made in 1545 and contains mechanical figures including a knight, a figure of death, and the King of jesters, which for  a procession on the hour.

I am pretty sure this next picture is the Rathaus, and is in an ornate Mannerist style. The building was begun in 1476 and completed in 1711. 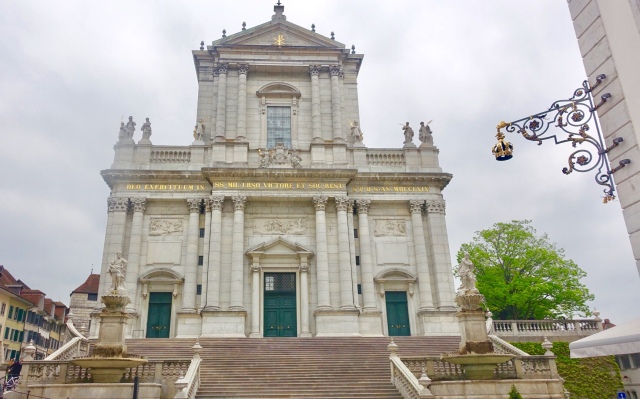 This is the backdrop to a school, where boys were playing basketball. I was intrigued by the ivy growing over the walls. 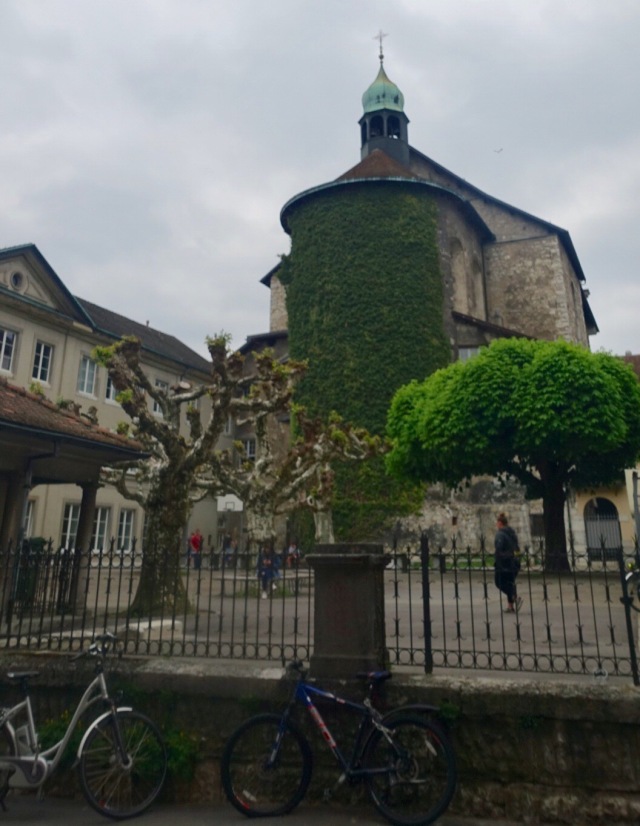 There are some lovely little shops selling lots of clothes, paper products, watches, home goods, food…and then there is this shop. Oh yes, they are real. 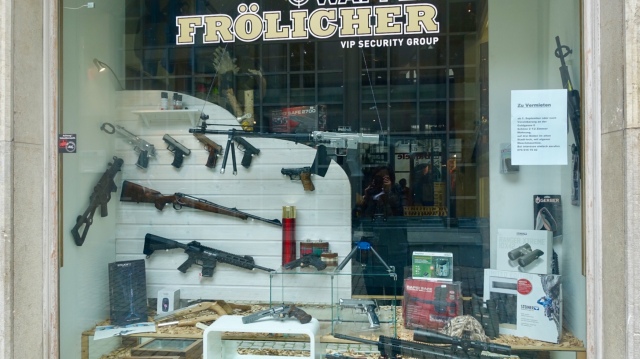 Down to the river as I planned to catch the boat down to Biel.

But alas, that starts tomorrow too!! So back via this park. In yesteryear this town was well guarded. 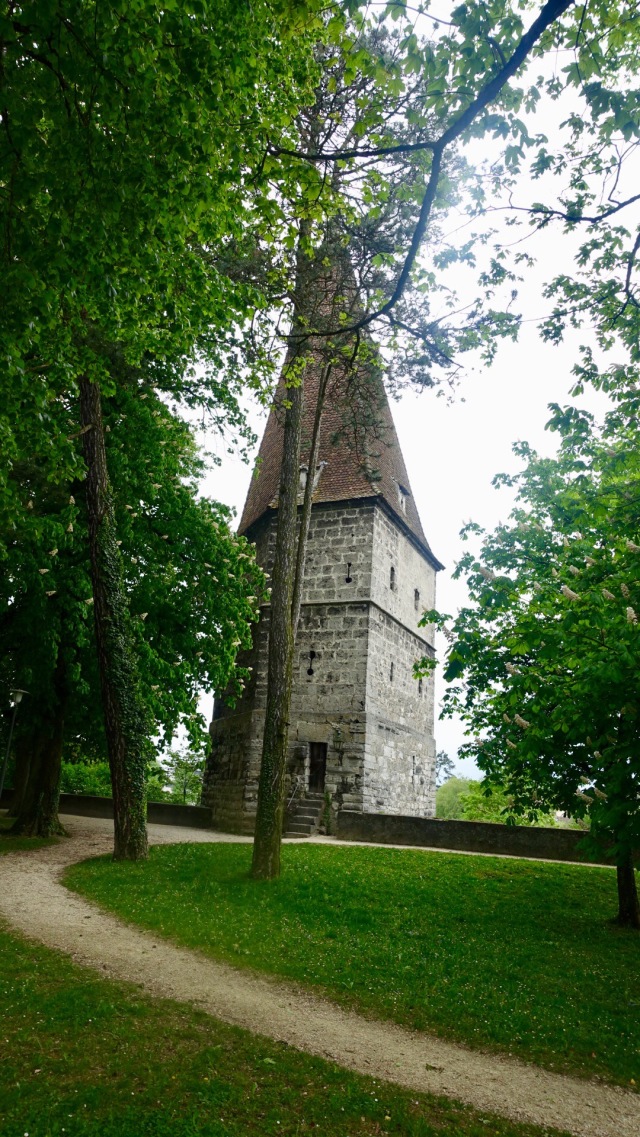 Back on the train to Bern, then I swapped to the Deiswill train to my accomodation, and then set off on foot as I had a dinner engagement to meet Ben’s new outlaws to be.

They live in the next village up a dirty big hill I won’t be taking my bike up any time shortly. 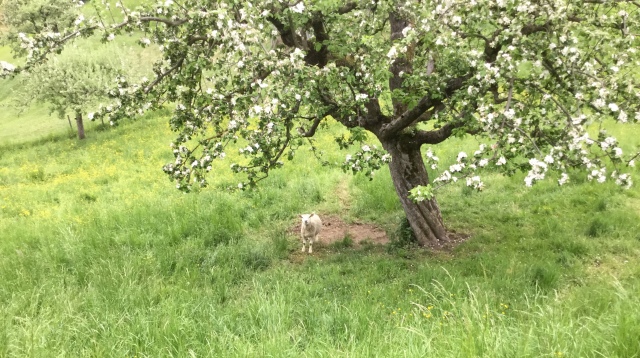 I was most intrigued by these snails. They are huge! That is a ten cent piece there for comparison. Apparently they are endangered…not sure if these two are trying to address the population shortage or not…not knowing anything about how snails reproduce.

Well here is the top of the hill. I had a lovely tea of raclette, followed by a chocolate hazelnut torte….then I walked home to work it off.

It is 11.05pm and I’m stuffed. Time for bed and we will see what tomorrow brings.