Today started off in the rain, leaving our hotel in Bregenz, Austria. We skirted around a section of Lake Constance to say goodbye and could see that the weather looked OK on the other side, hoping our side would improve quickly. 4 km out of Bregenz we crossed this river below.

We were mainly on cycle paths, both sealed and cinder following a flood dyke path. As one would imagine it was flat, but given the wet conditions and cinder grit flying around we just pooled along quite happily as today was to be a long tough day, with most of our altitude to be climbed in the last 20 km.

We rode over a bridge at the 45 km mark, the midway point being the border between Switzerland and Lichenstein.

We spent 18 km in Lichenstein all up before crossing back into Switzerland. We planned to have lunch prior to the climb and did so in a pretty little village named Maienfield (72.9 km). Turns out we had 10 minutes to buy some supplies at the local shop because at 12 noon all the shops were closing for lunch. So one litre of milk, 2 bananas, 1 toblerone and a half roll each constituted lunch, eaten at the local water trough.

Some gentle climbing ensued and we passed through Jenins ( 75.3 km) and then Malans (78.2 km). The ominous note descriptor at the 80.3 mark was that the road continued to climb for the rest of the day.

We skirted around Schiers, rode through a farm, continued with a mix of cinder and sealed bike paths, arrived at Jenaz (94.0 km) and Saas (101.2) still climbing gently. From Saas it became more serious and tough going arriving at the expensive ski resort of Klosters (111.2 km).

The mountains were becoming increasingly majestic and snow capped. 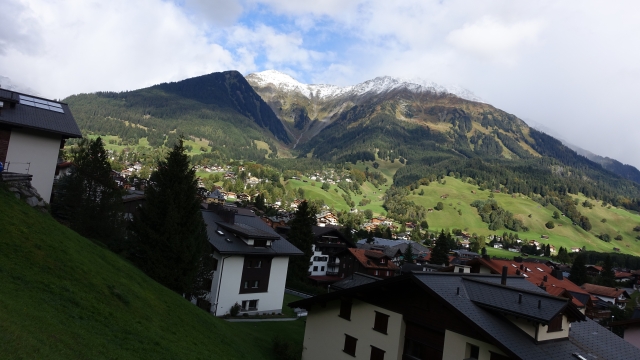 The rest of the climb was really tough and I am told was consistently around 10 percent. My lower back ached so I took the opportunity to stretch it a few times before proceeding with the us relentless climb.

Cars and trucks passed by very closely on the narrow and busy road. I decided to move a foot or so out into the road to force the vehicles to give me more space rather than constricting me into the side retaining wall.

I was very relieved to reach the top of the climb and then descend into Davos!

Davos is extraordinarily touristy. It is another expensive ski resort currently in off season. 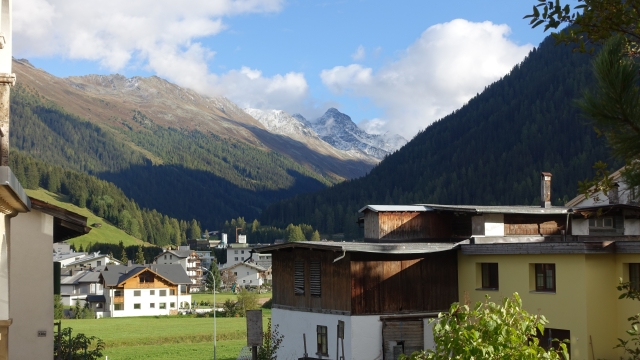