Last night at dinner I heard a man laugh. I said to Tony, “He has an Aussie laugh”. Is there such a thing?  I became a sticky beak and listened to their conversation. Yes, he was Aussie as he discussed tv shows such as The Sullivans, Homicide and Neighbors! I said “Aussie, Aussie, Aussie” and he reacted!

He and his wife were members of a much larger Aussie group doing a bus tour of Croatia. We sat with a few others during breakfast this morning. It was nearly three weeks since we had heard another Australian speaking.

When we were leaving some of the group wandered outside ready for their own adventures. I had my photo taken with three different groups, and here is the one we took. 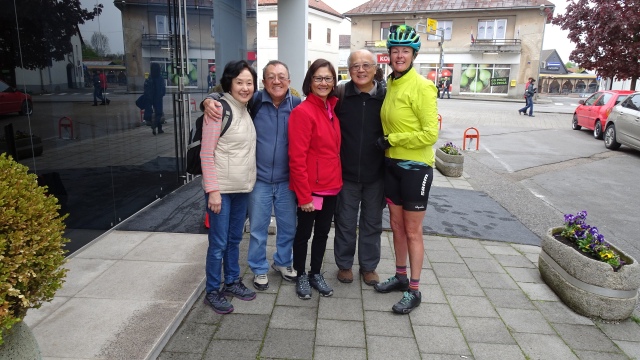 It was very foggy and cool as we left. In fact, it was 5.4 degrees Celcius and I had to spin those legs fast to warm them up.

One photo from Gospic, famous as the birth place of Nikolas Tesla. Sadly it has suffered badly with wars, WWII and the Croatian Independence War. Over 100 Serbians were rounded up and killed in the latter.

The road was nice and flat and we motored along nicely despite the cool conditions. 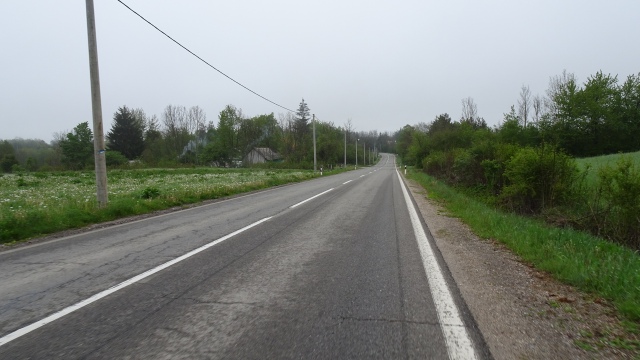 It’s been about a week now since we’ve seen a deer, but we keep looking.

This was a sobering memorial to the Croatian Independence War from the early 1990’s.

We noted many abandoned and seemingly destroyed homes and wondered if they had been damaged by war. The first one seems not to bad, but is abandoned. The second one is totally stuffed! There were hundreds of homes like this today. 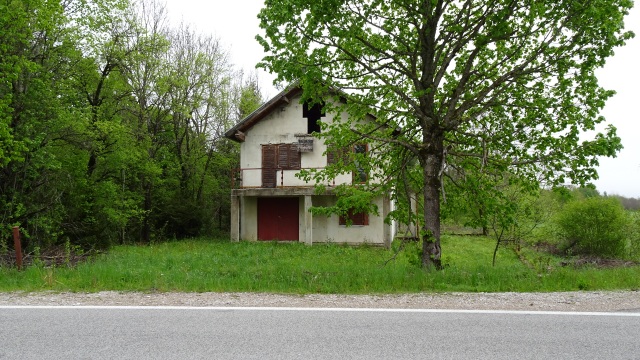 After 30 km of easy cruising, we stopped here to grab a coffee. The lady spoke some English and I asked her about the houses. She told me they were all damaged from the 1990’s war. How sad.

It was still foggy but serene.

Another destroyed and abandoned home. I later read that the Croatians also destroyed homes owned by Serbians. So the conflict was not all Croatia vs the Yugoslav’s but also against Serbs living within Croatia.

Just as we were about to commence our biggest climb for the day, the fog started to lift revealing a mountain range. 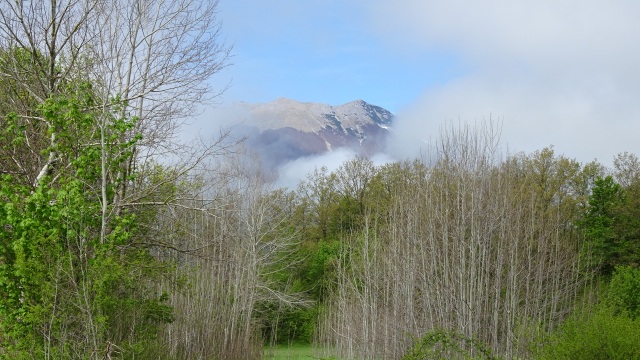 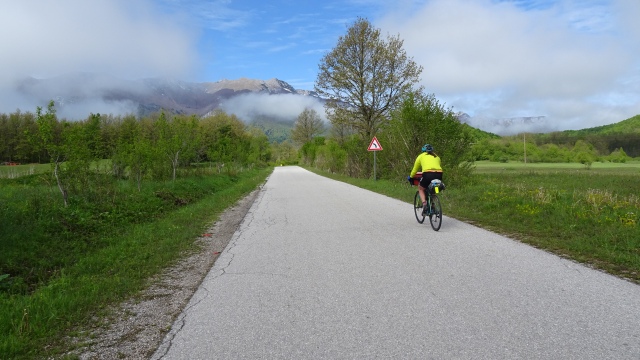 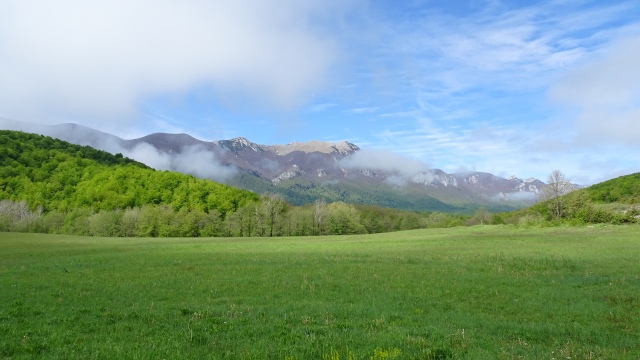 We crossed this cute creek, swollen somewhat from yesterday’s deluge. 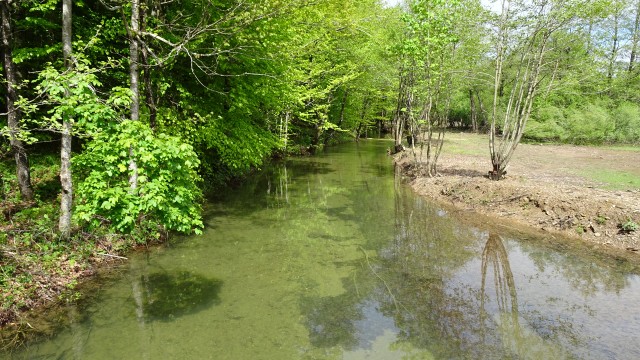 I lost count of how many of these memorials we rode past today. They are all in remembrance of soldiers killed during the Independence War with dates of death ranging from 1991-1995.

We started to climb and I was somewhat ‘surprised’ to see gravel! There was also a sign indicating 18 km worth! Now gravel is not my strong cycling point on the flat, let alone climbing and descending. We were at 600 m.a.s.l and due to climb to 1,051 m.a.s.l. Ooh it was going to be a slow trudge. 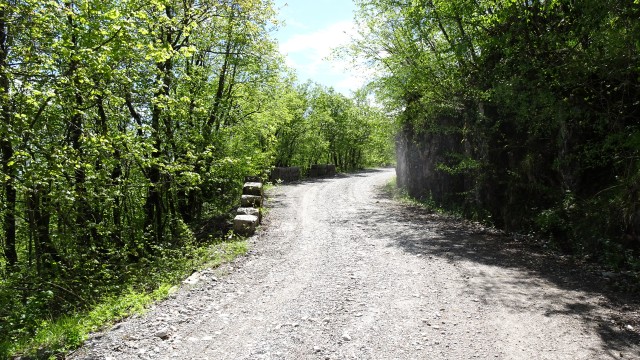 About half way up the climb there was a lookout tower providing expansive views. 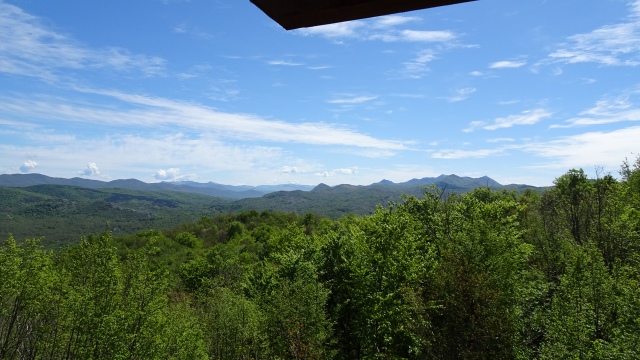 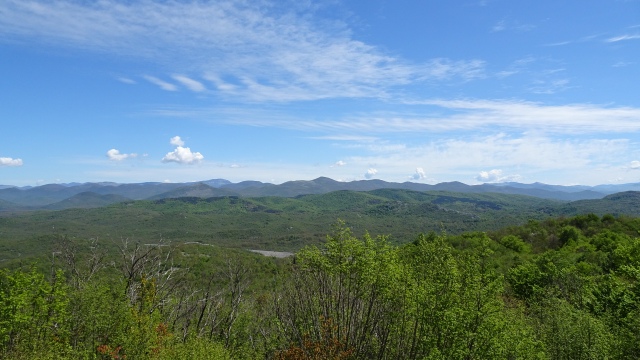 Below us, we noticed these circles of stone we assume were used to contain sheep once upon a time versus sacrificial usage!

Yet another destroyed home. Homes were few and far between on this ride. on the climb we only found a couple, and not one vehicle. This photo is at the top, where it was flat for one or two km meandering around.

The views from the top were outstanding.

This sign shocked me to the core. We were in an area of undetonated landmines! Woah! No sneaking off behind a bush up here for a nature break. I had no idea about this aspect of the area. I have since googled to learn that after the war, the Croatian Government spent many years identifying and removing many, but the job is not finished, and they have stopped. Instead, warning signs are placed. Over 1900 people have lost their lives due to land mines.

It was hard to pick the photos to use for today, but here are a selection. 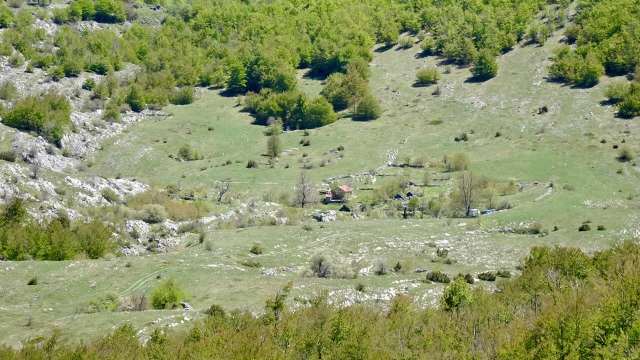 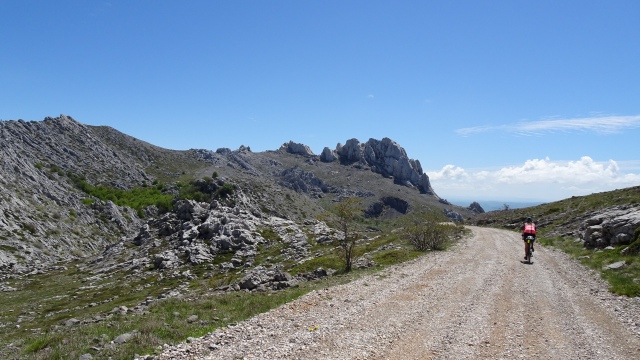 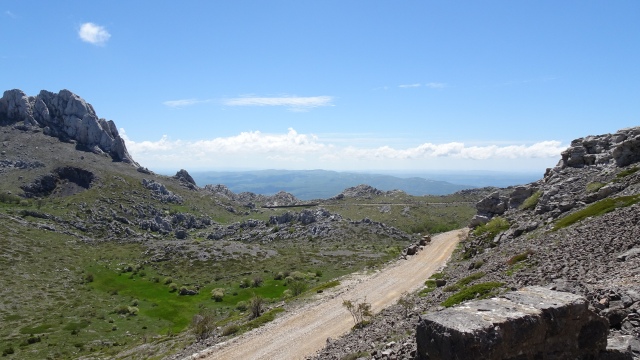 I really like this one. Has a Dolomite feel to it. I am going very slowly on this descent. I’d be lucky if I was doing 10 kmh.

Why was this wall built? So out of place and seemingly superfluous ?

Another memorial with an outstanding view looking towards Zadar.

We had numerous breaks on the descent as our hands were aching so badly from squeezing the brakes so heavily. This one is at the little chapel.

We heard a motor noise and looked down to see these beach buggies hooning up…they were flooring it and having a ball. We were glad to be off the road as they flew past. 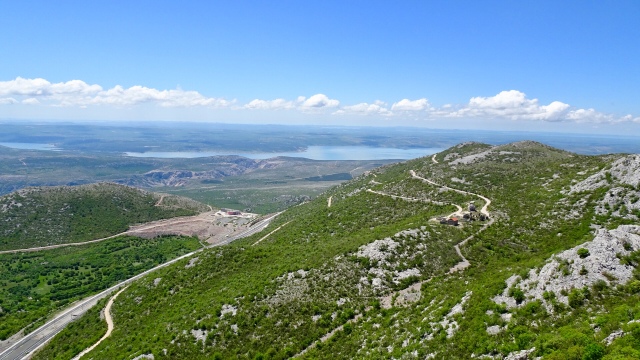 Here we have a new church being built, I dare say another war memorial as obviously there was a mass loss of life on these mountains. Hard to picture the tanks rolling up and down these hills and the many thousands of men. It is such a serene place today.

When we finally hit solid road, it was such a relief. All the way down to near sea level, the land mine warning signs continued. Below we are looking back up at part of the range. 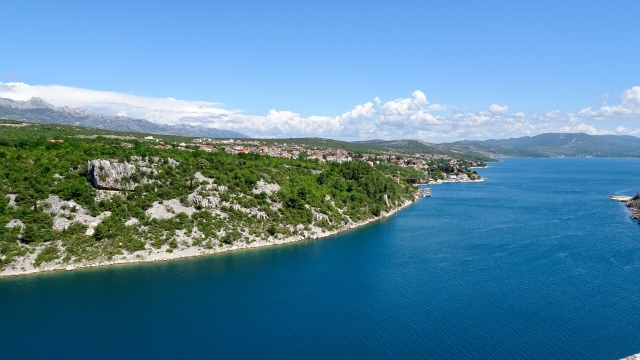 Our last few views before undertaking our death defying ride into Zadar. 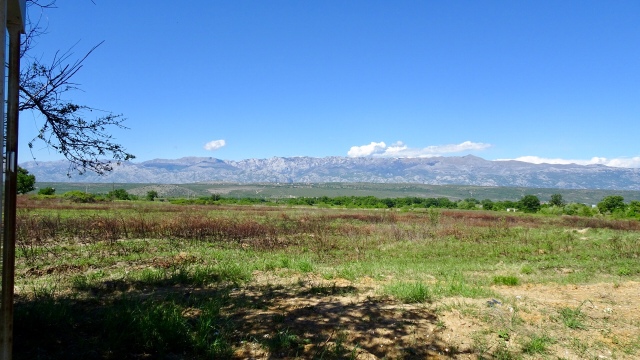 The last 30 km was hair raising. The cars were fast and there was a series of rolling hills to overcome. We just put our heads down, concentrated hard on white line on the road edge as there was no verge. Speed limits do not seem to be a consideration as whether the sign said, 40,50, 80… they all do far faster.

We found our accommodation and were relieved to arrive intact!

We enjoyed our walk around Zadar, another city also destroyed by the two wars. This first picture is looking out our bedroom window to the Zadar Cathedral of St Anastasia ( left hand side). The church origins date back to a basilica built in the 4th century. much of the current structure is 12th and 13th century. The bombing of Zadar damaged part of the church in 1943.

Next door, is the Church of St Donatus, construction commencing in the 9th century. The bell tower is part of the cathedral.

The various plinths and partial columns are from Roman times, part of the Forum, constructed by the Emperor Augustus. Zadar was a Roman colony from 48 BC until the 5th Century.

Down to the water front looking out to the various islands.

I wanted to listen to the unique sea organ. Alas it was impossible due to a running festival setting up that had very loud ‘duff duff’ music blaring. We intend to try again in the morning, swinging past before we head south to Split. 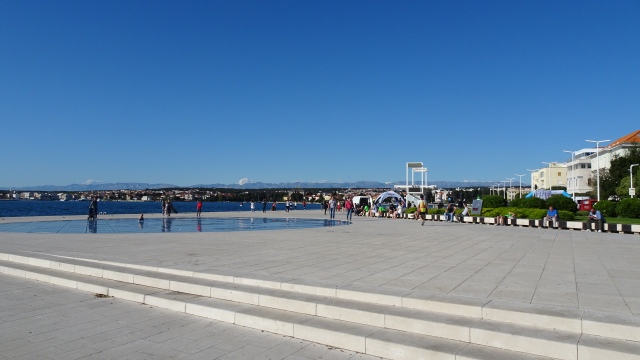 After dinner, we headed back to the water front for sunset. What a glorious sunset. 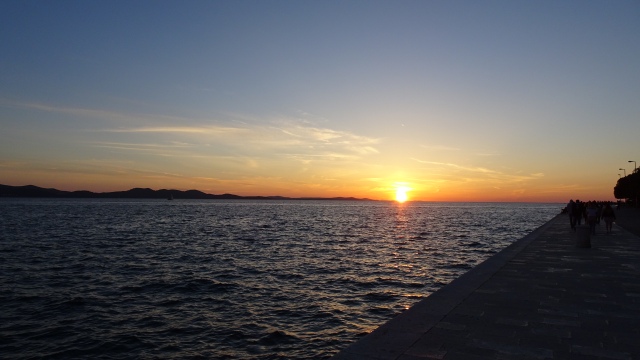 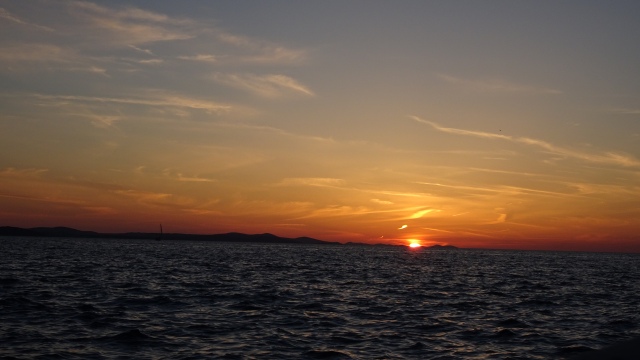 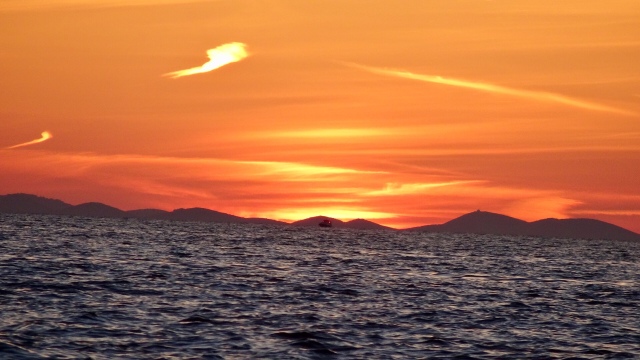 Then a few more shots as we headed home. 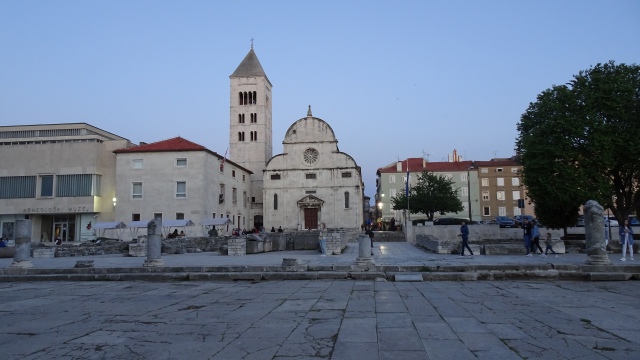 Am extraordinary day. Beautiful weather, a ride through an area not many venture that is incredibly beautiful with such a sad and sobering past. 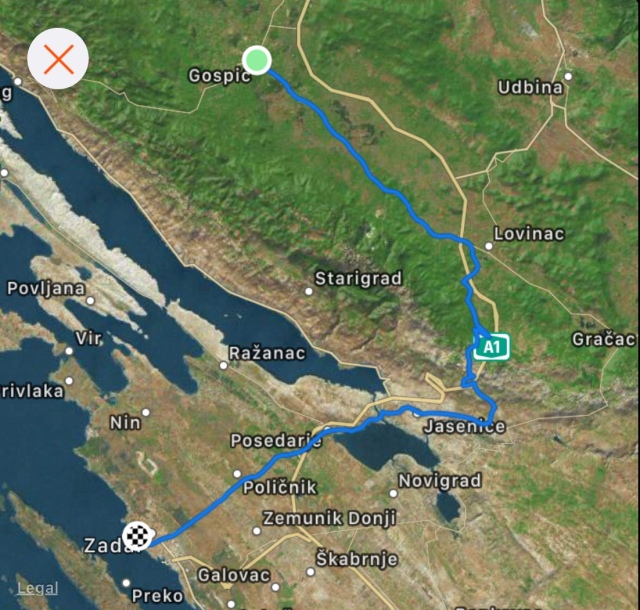 We have two days left in Croatia.  Next we ride to Split, around 150 km south from here. Tomorrow is a scheduled rest day as we catch the overnight ferry to Italy. Unfortunately there are bad weather warnings out for Sunday and early next week including eastern Italy, but I hope it sorts itself out tomorrow!!