Today we climbed out of France and dropped into Spain. Sounds simple but it was actually quite hard work! Some cumulative tiredness along with continuing poor nutrition at breakfast and the start of a head cold and back spasms made it quite a challenge.

The Spanish/French border is located at the top of Col Du Portillon at 1293 metres, according to the sign at the base of the climb.

A series of switchbacks commence just after the 3 km point. The climb was really scenic passing through lush green woods.

The switchbacks provided some nice views. I was passed by two other cyclists from Wales on the way up and both were encouraging.

A nice stone cottage on the climb.

Just before the summit there was this magical view back over France.

Tony waited for me just before the border. Here I come!!

The two Welsh cyclists were at this sign waiting for their two mates who were still climbing. One of them kindly took this photo.

We had a lovely chat with the guys swapping tales. Turns out we have ridden in their area on our LeJog trip when we rode through Chepstow to Tintern Abbey and the Wye Valley in 2013.

This is the view only a couple of km into Spain.

4 km down the descent is a viewpoint overlooking the valley and celebrating Spain’s success in the Tour de France.

Once at the bottom of the descent we rode along a river valley and crossed the Garonne, the river we had followed extensively around Bordeaux, where it is a wide and very muddy river. Here it is crystal clear!

The second climb of the day was required to take us off the busy main road. We crossed over the river and climbed steeply through a series of switchbacks to the village of Es Borders.

We continued to climb out of the village and continued through woods, adjacent to the river. The following sign ensured an expletive. 16.1%!!

This is a section of the wooded forest.

The beautiful river we followed.

Here I am ambling up a slope.

This route  did offer some great views. 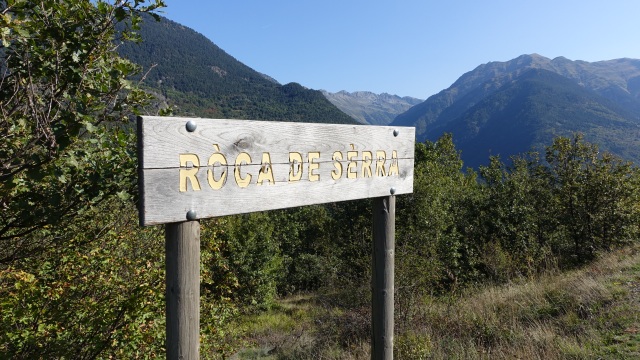 We ultimately descended into Gausac, an architecturally interesting town with winding, cobblestoned laneways. Next thing we were in Vielha a large, busy town.

We could have stopped for refreshments here but noted on our route that there was a third climb. I am not a fan of climbing with cold legs so we just idled through the valley spinning our legs in low gears as we continued climbing through Betren, Escunhau, Casarilh and Arties before arriving at our destination in Salardu.

We started this morning 700 metres above sea level. We are now at 1300 metres. tomorrow we are over 2000 metres before heading into Sort.

So following our usual routine of showering and washing our clothes we went wandering around Salardu. It is a small village set on a steep slope. It is a ski village.

We were really on a mission to find food!! Eventually we located somewhere very close to our accomodation. It looked closed but upon entering I think the entire village was in there, spirited away in a series of rooms all stone walled and seemingly underground.

A fantastic first meal in Spain!

Now to rest a little.. not too long mind you! But just a little given I am succumbing to a head cold.

Finally here are three shots from around the local village. The church goes back to the 12th century.