For those regular readers of my blog, you may recall Oakura was an overnight stop on my solo Auckland to Cape Reinga and return ride March 2018. It was an unmitigated disaster, as it was the day Cyclone Hola hit this region and I was on my bike. Alone.

It was also the day I really needed a friendly face and warm accomodation but found myself in danger of electrocution in a dodgy, sub standard caravan operated by an even dodgier character, Jason.

Nevertheless, I found a kind couple who helped me out, picking me up from the dodgy accomodation and transferring me a kilometre or so to their motel/caravan park, greeting me with a mug of hot soup and a token to operate the clothes dryer.

I was so thankful and decided to revisit their site.

First off, we needed breakfast and had purchased eggs, bacon and cheese when the Tutukaka General Store was open on Christmas Eve.

Bidding our Air BNB host Michael farewell we tackled his driveway…18 percent gradient, warming us up for a day of hills. 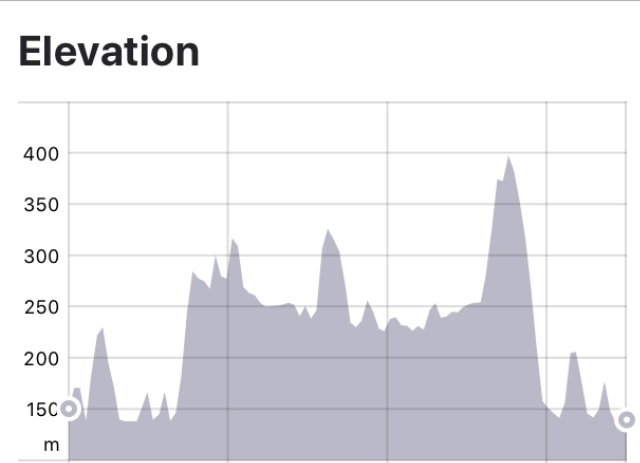 Up and down into Tutukaka we then climbed and descended to Matapouri Bay where we spent time chillaxing yesterday.

Climbing up another hill to the parking bay for walks to Whale Bay. Some beautiful views and more tsunami warning signs. 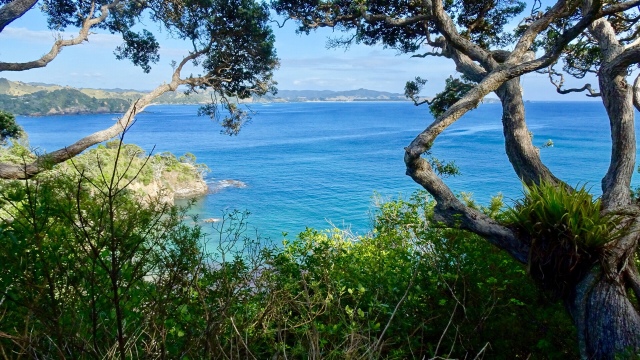 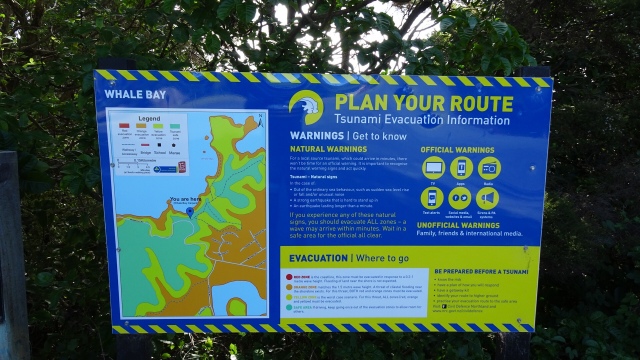 Descended to Woolley’s Bay where the surfers were out in the water waiting patiently for their big wave!

Sandy Bay was next, and we then headed in a westerly direction through rural farming properties, up and down hills. More wild turkeys, and then another one cresting yet another climb.

Passing through the small settlements of Waipaipai and Marua we stopped to buy water and iced coffee in Hikurangi, a quaint little town. 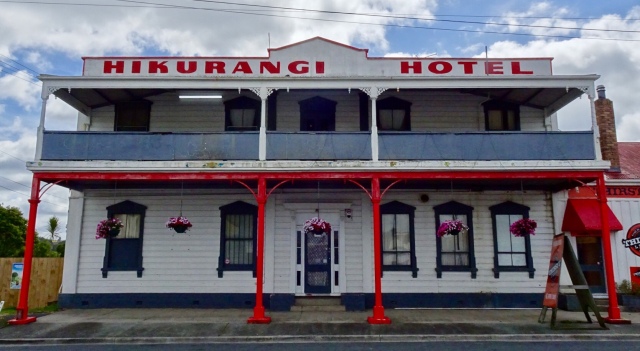 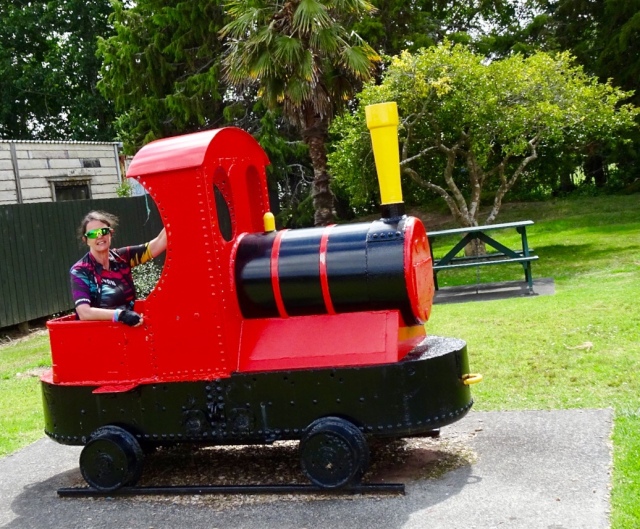 There we met Tim, a very friendly guy who stopped us as we left the General store to talk cycling. He suggested we could wander up to the Curios shop, as that was where he had left his bike.

So after refuelling and using the local amenities we did that.

Turns out Tim lived in Tasmania for a number of years and still owns a property at Carlton Beach. Small world. He is now a drilling engineer in the oil industry working down at Taranaki near where we spent Christmas last year.

Tim also took a photo of us, which he kindly emailed.

Bidding Tim farewell (but not before a rendition of Waltzing Matilda played on a sheep herders whistle), we headed out of town to join State Highway 1. Air raid sirens sounded, and it was a very eerie sound.

We had only ridden about one km on the highway when we encountered all traffic at a complete standstill. We kept riding down the verge until we got to the front of the queue, and it was apparent why the air raid sirens had sounded. 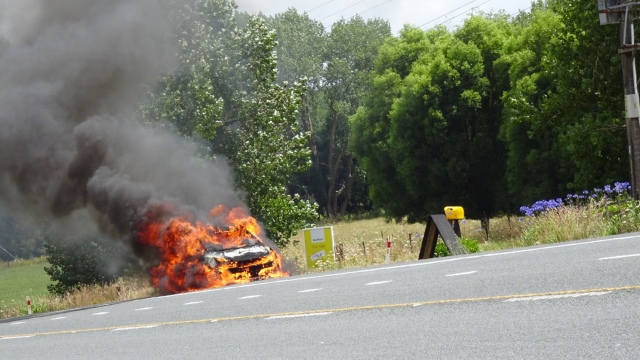 We were hoping no one was inside the car. The car was making many loud explosive noises as bits started flying up in the air. We were well clear….in this photo Tony has used the zoom feature.

The fuel tank exploded and flames extended along the road.

The boys in red arrived.

They quickly extinguished the fire. Then the police arrived…having missed everything!

Fortunately the occupants were fine. A young Maori couple were brought through by police, including their very cute puppy. We were very relieved that they were safe and sound.

We were given the all clear to proceed, which was handy as the road was blocked on the other side for about 2-3 km. Many asked us what was going on.

We were pleased to leave SH1 and turn off towards Oakura. The traffic, curiously enough, was far busier than SH1 with most vehicles towing something ( trailers full of holiday items, caravans, boats). 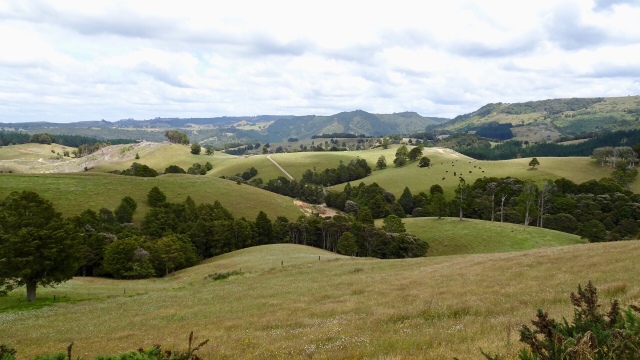 Descending towards Helena Bay we noticed signs for a cafe and art gallery. We ummed and aaahed before deciding to check it out. It was down a gravel track!!

What a find it was. Bike racks and out of sight from this picture, security cameras watching the bikes! 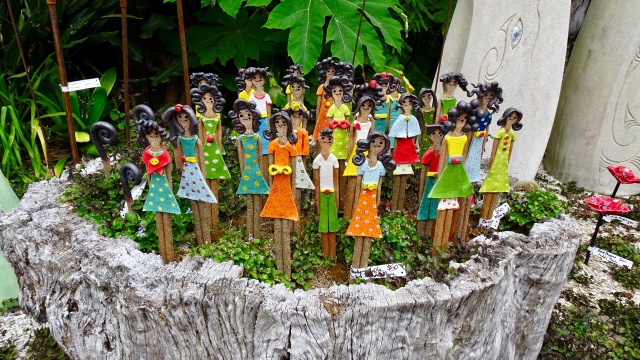 Touring means you cannot buy much in the way of extras. Soooo we needed to rearrange our luggage as I purchased two ceramic items. The bikes really need to stay upright now!! I would photograph the items but they are nicely secured within bubble wrap and tape. They can stay like that until we return home.

The dodgy Air BnB is still running, and I noticed that the even dodgier Jason replaced the cracked caravan windows but still has a power lead running through the window to the power point.

Moving right along, we climbed the last hill and descended to our accomodation on the shores of Whangaruru Bay.

Interestingly the lady at reception remembered me from last year!

A curious place as the beach is used by owners of shacks on the next bay, only accessible at lower tides. Traffic gets a bit tricky at times.

Some really lovely shacks and views. 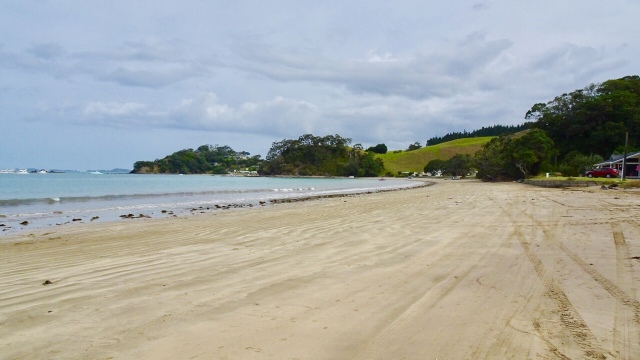 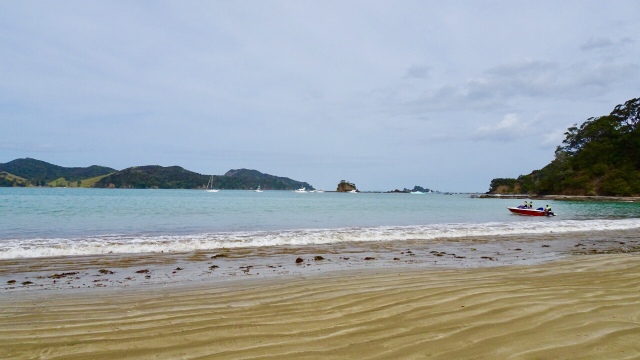 Here is a map of today’s route.

Today is day 6, and it was thoroughly enjoyable. We loo, forward tomorrow as we arrive in the Bay of Islands region. 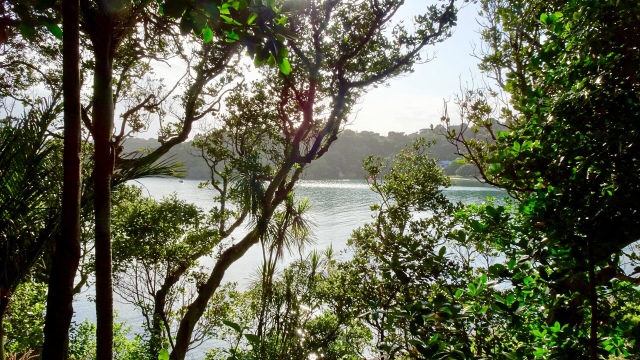 We are staying in a cosy little cabin, akin to an enlarged cubby house. 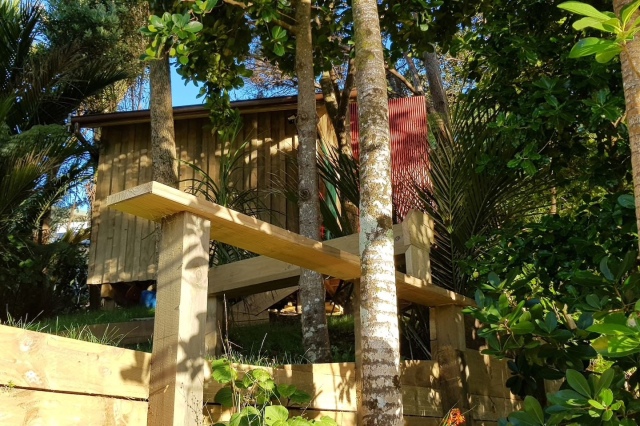 We decided to do a short Christmas ride cruise to Matapouri Bay, some 9 hilly km away. Bonus was the local store was open and we were able to grab a nice coffee. The owner was doing a roaring trade with a constant stream of customers.

We parked the bikes on the beach and got our bathers our to test the waters. 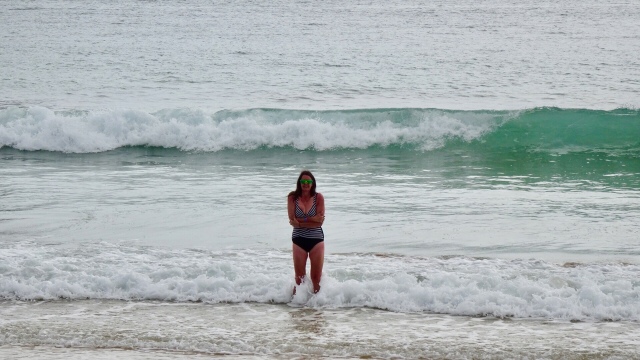 Heading down the beach…. 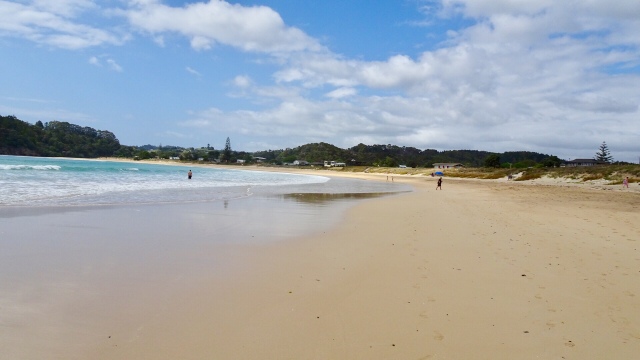 A walkway to another beach reveals these Maori totems.

Volcanic beach on the other side.

Continuing along Matapouri Bay…wading through water to find a couple of small and private beaches.

More totems. The area where these totems are has a tapu on it, and is closed for regeneration. 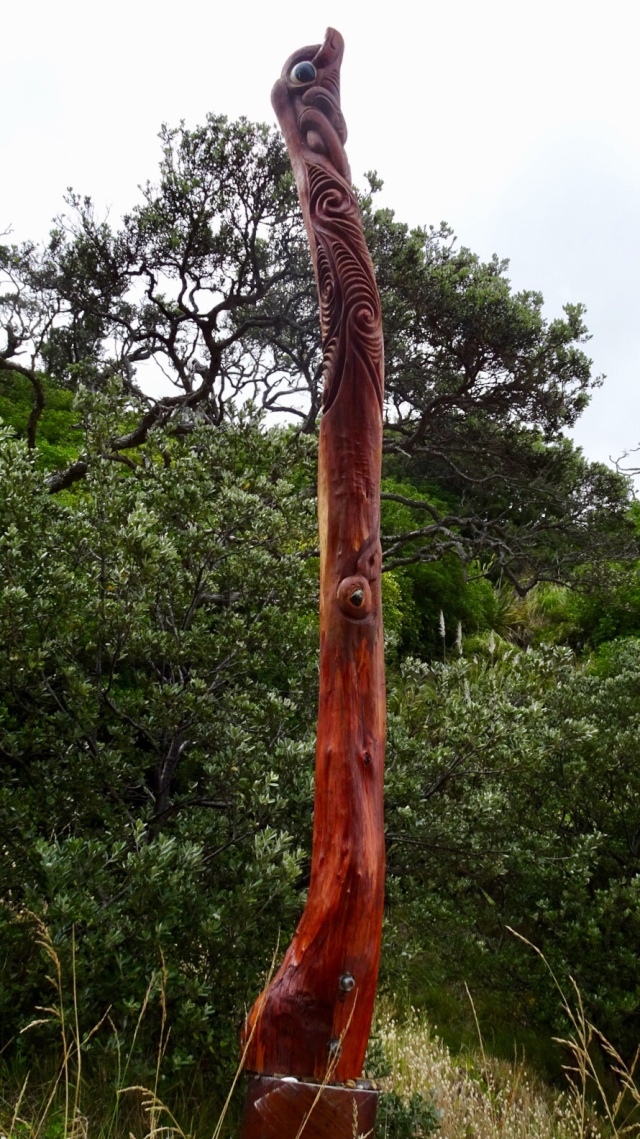 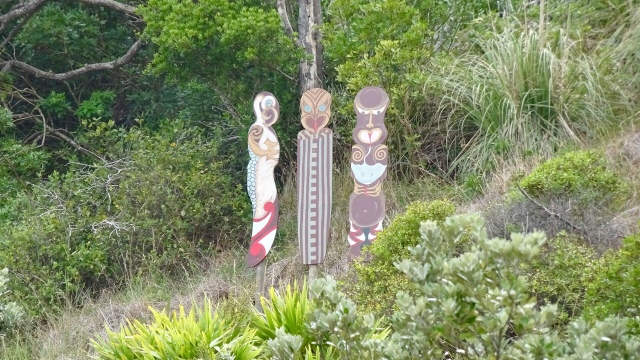 Our Air BNB host Michael invited us to share some food and company with him, which was exceedingly kind.

We are ready to move onto our next destination, keen to get back into touring mode.

I mentioned yesterday that our Air BNB driveway was steep. Photos seem to show angles accurately, but I assure you this has a 28 percent pinch…the second photo is me walking my bike down to the road with Tony looking back up. 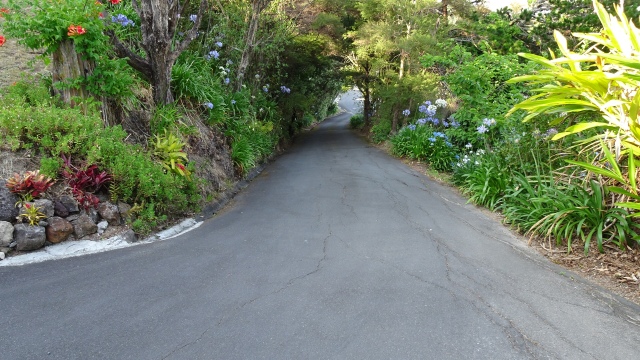 I probably should have entitled this ride something to do with the letter S.

As you can see from the map, we weaved around. From Whangerei to Tutukaka there is a direct route, but to see more, and add more km to our day, we decided to head out via the Town Basin towards Whangarei Heads following the shoreline of Whangarei Harbour.

The ride undulated all day but was quite pleasant despite the wind.

At the top of one of our earlier climbs we met Peter, from Linz in Austria. He is doing his very first cycle tour. I love this aspect of touring, meeting people with similar mind sets and passions, comparing notes on where they have been, where they are heading, their gear set up and so on.

There were some early delightful views looking towards the coast. 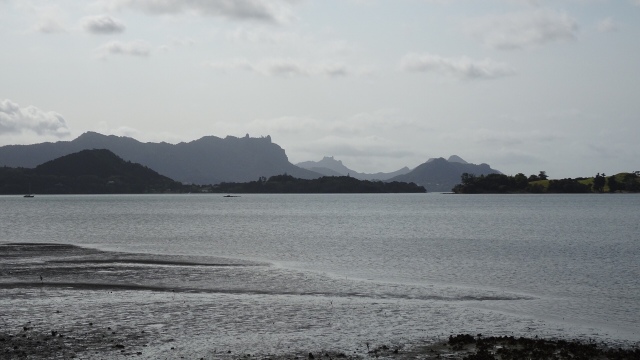 There were numerous signs reminding people to keep dogs on leads to protect the kiwi, and other simple reminders such as this one. 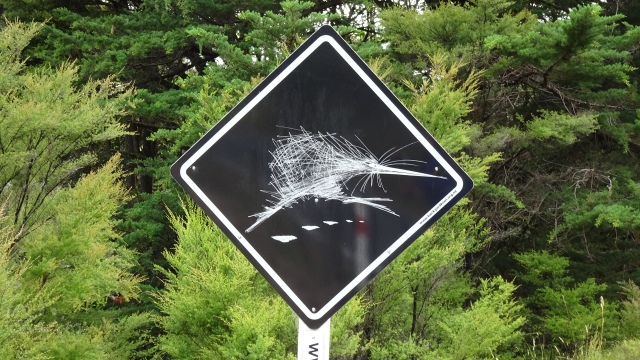 Parua Bay village was small, but seemed to have a number of cafes, but we pushed on heading away from Whangarei Heads in a north easterly direction towards Pataua South.

Pataua South is a small village on the shores of an estuary, with a sandy surf beach behind. 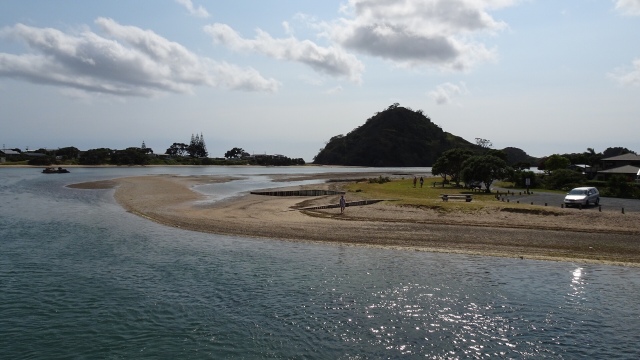 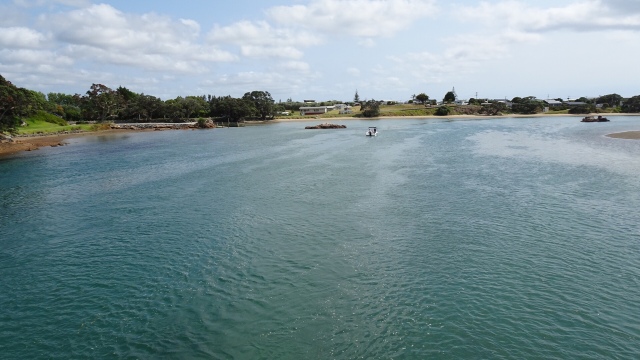 The road came to an end but there was a foot bridge connecting to Pataua North. Here I am walking my bike across the bridge. 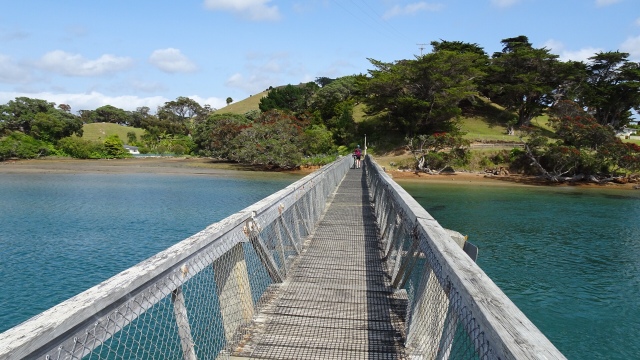 No cafes, so we pulled up on the banks of the river to have a snack and enjoy the view.

The road weaved around heading back towards the outskirts of Whangarei. We finally found a cafe! The Black Stump at Glenbervie.

A nice cold fruit smoothie went down a treat!

Another climb and a lookout.

Before heading to our accomodation (for the next 3 nights) we rode down into Tutukaka to see what was where!

Climbed back up the hill, and turned into more hills before finding a steeper driveway than this mornings! I seem to have an incredible knack for selecting accomodation involving steep hills.

The Bach is a cubby house on the shores of Kowharewa Bay. This first picture is the view from our little deck.

Kids playing in the bay. 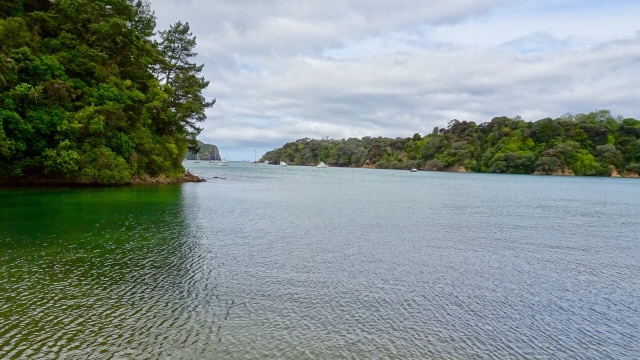 I’ve got to stop writing. The mosquitos are liking me too much, and I should go inside!!

Thanks for reading, catch you tomorrow.